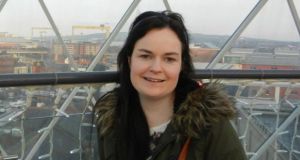 When the remains of Karen Buckley are brought home, her funeral mass is expected to take place at the Church of St Michael the Archangel in Analeentha in Mourneabbeey.

The family of murdered Irish student, Karen Buckley are hoping to receive confirmation this weekend that they can travel to Glasgow to collect her body and bring her home for burial.

John and Marian Buckley and their three sons, Brendan, Kieran and Damian have been waiting all week for news from Scotland that the body of their only daughter is being released.

The family returned from Scotland to Cork last Saturday after being told by the Scottish authorities it would be several days before their daughter’s body would be released.

Initially they had then hoped that Ms Buckley’s body might be released by Wednesday but the man accused of her murder has exercised his right to have a second post-mortem carried out.

Lawyers for Alexander Pacteau (21), who is due back at Glasgow Sheriff’s Court Friday, indicated earlier this week that their client wished to have an independent post-mortem carried out.

Under Scottish law, like Irish law, a person accused of murder can request to have a second post-mortem carried out on the body of a homicide victim by their own pathologist.

It is understood that a pathologist retained by Mr Pacteau’s lawyers had been expected to carry out a post-mortem on Ms Buckley’s remains in a Glasgow hospital on Wednesday.

A spokesman for the Crown Prosecution which represents the Procurator Fiscal declined to comment on when Ms Buckley’s body might be released to her family.

The Irish Consul in Edinburgh is continuing to liaise with the Scottish authorities in relation to the release of Ms Buckley’s body and is keeping her family briefed on developments.

The community in Mourneabbey are continuing to rally around and support the Buckley family with friends and neighbours calling to express their sympathies.

It is believed the family are hoping to have their daughter’s body lie in repose at their family home at Glynn in Mourneabbey before she is then brought to a funeral home in Mallow.

The funeral mass is expected to take place at the Church of St Michael the Archangel in Analeentha in Mourneabbeey with burial afterwards at Burnfort cemetery, also in the parish.