Find pushes back earliest evidence of human habitation of island by 2,500 years

Dr. Marion Dowd, an archaeologist in IT Sligo, demonstrates how markings on a bear bone have pushed the timeline of when Ireland was first settled back by 2,500 years. Video: IT Sligo/Ocean Films 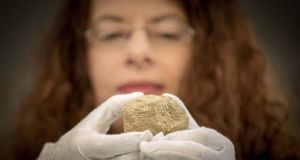 Radiocarbon dating of the bear’s knee bone, one of some 15,000 bones found in the cave, confirmed it was 12,500 years old. Photograph: James Connolly

A study of an animal bone discovered in a Co Clare cave more than a century ago has led archaeologists to push back the date when they believe humans arrived in Ireland by some 2,500 years.

Analysis of the butchered knee bone from a brown bear, which lay in a cardboard box in the National Museum of Ireland for a century, has indicated that humans lived on the island 12,500 ago, the researchers say.

Since the 1970s the Mesolithic site at Mount Sandel in Co Derry, dating back some 10,000 years, has been regarded as the oldest evidence of human occupation in Ireland.

However, the finding by archaeologist Marion Dowd, a lecturer at IT Sligo, and Ruth Carden, a research associate at the museum, has been described as a new “starting point”.

Dr Dowd said “it is very likely that the date of human existence in Ireland will be pushed back even further” in time.

She said there had been evidence of human existence in Britain on and off for 700,000 years.

Radiocarbon dating of the bear’s knee bone, one of some 15,000 bones found in the cave, confirmed it was 12,500 years old, and the researchers noted visible cut marks to the bone which they say were made at the same point.

Dr Dowd said analysis of the bone, found in the Alice and Gwendoline cave in Co Clare in 1903, provided evidence scientists had been seeking since the 1860s of human existence on the island during the Palaeolithic period.

She said brown bears became extinct in Ireland 3,000 years ago, and the team who discovered the bone did not have access to radiocarbon dating to determine how old it was. However, they noted the significance of the cut marks in their report of the find.

The bone was stored in a collection at the National Museum of Ireland from the 1920s, and Dr Carden started to document the museum’s animal bone collections from early cave excavations.

“We actually had three bear bones analysed – the other two were from the Mesolithic period,” said Dr Dowd.

The pair got funding from the Royal Irish Academy for radiocarbon dating, which was carried out by the Chrono Centre at Queen’s University Belfast.

The bone was then sent to three bone specialists – Dr Jill Cook at the British Museum in London, Prof Terry O’Connor at the University of York and Prof Alice Choyke at the Central European University in Hungary. All three determined separately that the cut marks were made on fresh bone, confirming they were made by humans during the Palaeolithic period.

Dr Dowd said the seven cuts on the knee bone were probably made by someone who was inexperienced and who was using a long flint blade.

She believes they were extracting the tendons for use as string or for sewing, while the bear carcass would also have provided food and fur.

Dr Dowd and Dr Carden’s paper on the discovery has been published in the international scientific journal Quaternary Science Reviews.

Nigel T Monaghan, keeper in the natural history division at the National Museum of Ireland, said the some two million specimens housed there were all available for research.

“We never know what may emerge. “Radiocarbon dating is something never imagined by the people who excavated these bones in caves over a century ago, and these collections may have much more to reveal about Ireland’s ancient past.”