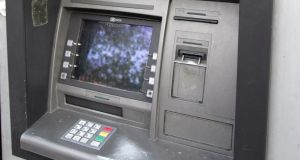 Customers in Claremorris were delighted to find an ATM that handed out more than twice the sums of money they had requested. Photograph : Matt Kavanagh/The Irish Times

Christmas came early to bank customers in a Mayo town — thanks to an ATM glitch that paid out more than twice the cash they had requested.

The machine at the Claremorris branch of Ulster Bank unexpectedly began to spew out amounts of cash more than twice what individual customers entered into the keypad.

The result was that an unknown number of card holders walked off with funds for a Christmas shopping spree way in excess of what they had been planning.

The surprise festive bonus arrived on Thursday evening as customers began to queue to get cash from the ATM located in the Square.

It came to light when customers sought relatively small amounts of cash, such as €20 or €40. This involved the delivery from the machine of multiples of €20 notes.

But instead of twenties, the ATM began to issue €50 notes—to the obvious delight of the hard-pressed shoppers.

Mobile phone and text messages went into overdrive and within minutes there was a queue of more than 30 people stretching down the square of the Co Mayo town.

Christmas wit was in evidence as the banter along the growing line of customers became more raucous. The person at the head of the queue was invariably called on to “leave some for us”.

One young man walked off with more than €600, having entered an amount of less than half that figure.

But the unexpected Christmas bonus may last only a few days as Ulster Bank said that it would be in touch with customers who experienced the “error”.

On previous occasions where cash machines have emitted cash in excess of the amount requested, customers traced by their card and pin numbers were contacted to return the excess amount.

Unsurprisingly, none of Ulster Bank’s customers in Claremorris were adversely affected by the incident.

The bank said: “We are aware of an ATM error last (Thursday) evening, which impacted a small number of customers. We are currently investigating to identify affected customers and will be in contact with them in due course.”