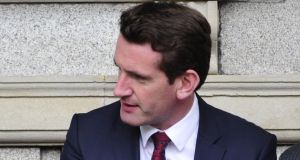 Asylum seekers fleeing their home countries have had their situations compounded by the experience of direct provision in Ireland, the Minister of State for New Communities, Culture and Equality has said.

Speaking after a visit to two direct provision centres in Limerick, Aodhán Ó Ríordáin revealed how he had met one asylum seekers who is “quite literally broken” by his experience.

“In terms of direct provision the managers at the centres are doing their best. The main issues around direct provision are about the length of time but I have to say I met one man today and he is quite literally broken — broken by his experiences before he came to Ireland and it has been compounded by his situation here.

“It was pretty emotional actually to meet someone who was quite literally falling apart and broken as an individual and you couldn’t but be affected by that person’s circumstances,” he added.

Mr Ó Ríordáin said he does not believe the system of direct provision should be abolished but insists it needs to be a more “humane system” that we can “be reasonably proud of”.

“We have people in the system that are there far too long and there is a sense of hopelessness around what people are experiencing. I think most people would agree that the system can be defended if you are in it for a short period of time, and that was the original intention, but now people are in it for a horrible amount of time and particularly when children are involved.”

Outlining that the working group set up to reform and look at the area of direct provision was due to meet within the next two weeks, Mr Ó Ríordáin said he felt the Government’s approach to the situation was sufficient.

“I feel a huge sense of responsibility to oversee a system that is an awful lot more humane and an awful lot more dignified for those who are here and want to be part of this country who are going through the asylum seeking process.”

New legislation and and a more fast tracked approach for new entrants to the process should deal with some of the issues, the Minister added.

“For the existing system, I know people are advocating for its complete abolition and I can understand where they are coming from, but my point of view is that if we can work our way through the individual issues we can get an awful lot done.

“The length of time that is the overarching problem that people have and the institutionalisation that happens as a result of that.”

There are added problems, the Minister said, with regard to how adequate parenting can take place in this type of scenario, how can you restrict somebody from their education, their right to work and community links.