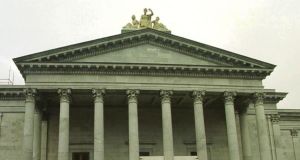 About 30 anti-eviction campaigners mounted a protest outside Cork Circuit Court today to highlight the number of people facing eviction on foot of bank demands.

Members of the Anti-Eviction Taskforce and the Hub Ireland staged the peaceful protest outside the Washington Street courthouse where banks were seeking 93 eviction orders.

Anti-Eviction Taskforce member Brian McCarthy said the protest was designed to highlight “the uncooperative approach” being taken by banks to distressed mortgage holders.

“People have letters come in the door every day, they are being tortured with phone calls - one couple got 19 phone calls [in] one day putting them under pressure over their mortgage,” he said.

Mr McCarthy explained he began to come under pressure from his bank in 2013 after he lost his job and was unable to make his €1,700 a month mortgage repayments.

The campaigner said he had paid the mortgage for six years, but when he was out of work for a short period he had to use over €30,000 in savings to repay the mortgage on his home in Killarney.

Mr McCarthy said he felt that he had been deceived by his bank and he decided to come into court to fight his own case, but he hasn’t heard anything from his bank for nine months.

The campaigner said there were 96 people before Cork Circuit Court last week facing eviction and this week there were 93 before the court, but that the problem is not confined to just Cork.

“In Munster alone, just in January, there were 676 repossession cases . . . so we have reached epidemic levels here and we’re trying to help people to fight.”

Another protester, Mike O’Neill, a self-employed joiner, was evicted from his home in Dunmanway in west Cork in 2014. He spoke about the impact such a drastic action can have.

“My business was beside my house so they’ve taken my business and my means of employment and . . . of generating cash to pay any alleged loan from the bank.

Mr O’Neill said he owed €130,000 with monthly repayments of €900 when he fell into arrears and although he was making part payments, that wasn’t acceptable to his bank.

“Back in the early 1900s, English landlords gave people 70-year mortgages, because people were poor so they gave them time to pay back, but these banks want instant repayment.”