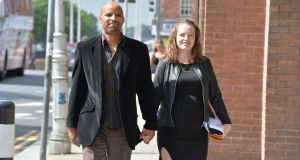 A woman who lost her case against the Health Service Executive (HSE) to give birth at home says she will go abroad to have her baby next month.

Aja Teehan had a partial victory yesterday when a judge refused to award costs against her, accepting that her case involved an issue of public interest.

Speaking after the costs issue was resolved, she said she was now prepared to become a “birth refugee” by travelling to the UK when she goes on maternity leave at the end of this month. Her second child is due on October 13th.

Last month Ms Justice Iseult O’Malley had decided that Ms Teehan, a university lecturer, was not entitled to compel the HSE to accept liability for the risk involved in a home birth when it did not believe the risk was justifiable.

Yesterday the Minister for Health and the HSE sought orders that Ms Teehan pay their legal costs. Both argued that no point of public importance had been raised in the case and that the normal practice, where the losing party should pay all the legal costs, should apply.

Judge O’Malley said she would not make any order in relation to the costs of the action, which means that each side will have to pay its own legal fees.

The judge agreed with submissions made by Ms Teehan’s lawyers that she had raised issues of public importance in her action. She said the case had brought clarification to certain matters.

Giving birth in Britain
Ms Teehan said she was not the first nor would she be the last Irish mother to give birth in Britain. She intended to go there with her husband and six-year-old child to a place she would not be making public.

“I have found out that there have been women leaving this country for a long time, not for abortions but to give birth somewhere where there is self-determination,” she said.

Ms Teehan was not in court yesterday as she had used up her leave as a lecturer at NUI Maynooth in fighting the case.

She said she was out of time to go to the Supreme Court, with only five weeks to go before she was due to give birth. The other alternatives were to give birth at home without a medical professional present or to give birth in a hospital, neither of which she was prepared to do.

“To stay would be to increase the risk to my child,” she said.

Ms Teehan said to date they had incurred legal costs of nearly €11,000.

“Everybody should remember that it leaves Irish women with State control over their pregnancy.”

She has made a financial appeal through her blog for help in defraying the legal costs and the costs of going to the UK.