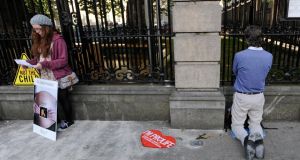 Protesters gathered outside Leinster House again this evening as TDs resumed the debate on the Protection of Life During Pregnancy Bill.

Anti-abortion campaigners arrived first, congregating on the right side of the entrance and forming a small wall of placards. “Kill the bill. Not the child” said one while another with a picture of an unborn asked “The death penalty? For me? Why?”.

Men clutched rosary beads and recited prayers aloud as Sinn Fein’s Pearse Doherty was heckled on his way in the gate over his support for the bill.

After posing for photos with some of the protesters, Independent TD Mattie McGrath was not confident of winning the vote. “Sure we know the way the vote is going to go. It’s a foregone conclusion,” he said.

“I think the Taoiseach is afraid of the people. It should have gone to a referendum.

“The people voted twice on this and I think, under the provisions we’re talking about, we’re acting erroneously here in passing this Bill,” he said. “I’m not opposed to the whole bill but those provisions.”

Anti-abortion activist Olivia Conolly agreed a referendum should have been held on the legislation. “We as a nation voted to do away with the death penalty for hardened criminals, and for murderers. And now we’re bringing in the death penalty for innocent babies who have committed no crime,” she said. “I think the whole bill is so flawed that it’s illegal.”

Pro-choice protestors arrived later holding signs which read “Keep your rosaries off our ovaries” and “Honk for choice”.

Actress and comedian Tara Flynn was also amongst them. “For me it’s what makes sense,” she said. “Women should be able to decide for themselves about their own bodies.”

Many were there not to protest against the legislation but to make a stand against the pro-choice movement.

She said: “This isn’t abortion on demand, it is simply to protect women in danger.”.

Three senior Kinahan gang members facing up to life in prison in the UK 19:09
Dr Tony Holohan to be awarded Freedom of Dublin 18:58
Coronavirus: Four new cases but no deaths reported for second day in a row 18:53
Garda to ‘reap benefits’ from crime phone hacking operation 18:50
Gardaí seize cash and vehicles in ‘significant blow’ to Longford gang 18:49