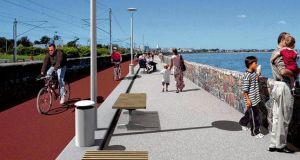 Dublin could have the longest urban seafront promenade and cycleway in Europe, affording the city an invaluable public amenity, for the cost of just one motorway bridge.

The S2S (Sutton to Sandycove) project to create a continuous non-vehicular route around Dublin Bay, covering a 22km stretch of coastline, remains incomplete after more than a decade of planning.

According to Michael Collins of the S2S group, completing the final 8km of the route, most of which is on the southside, would cost €20-€40 million, the price of a standard motorway bridge.

He believes a proposed eight metre-wide path, which will run next to the coast for most of its length, has the potential to transform the city’s commuting culture as well as buttress vulnerable city flood defences.

“The possibility of being able to get from the suburbs to the city centre in less than 20 minutes at rush hour for free, on a safe, level, pollution-free route, is still the chief objective.”

He points to the fact that some 5,000 secondary schoolchildren between Blackrock and Sandymount would be within a kilometre of a traffic-free cycleway.

Despite the benefits, work on the southside elements of the project have ground to a halt.

The most contentious part of the route is a 4km stretch from Strand Road in Sandymount to the Blackrock baths.

The National Parks and Wildlife Service (NPWS) is concerned about the potential impact on several EU-protected bird habitats. At issue is a bank of eel grass behind a row of houses near Merrion Gates, consumed by the bay’s Brent goose population.

The potential impact on the Booterstown spit, which hosts a range of bird species, is also a concern.

Paradoxically, Mr Collins says the longer the area remains without an adequate walk and cycleway, the more people will be inclined to walk on the beach, potentially disrupting the habitats that the NPWS wants to protect.

One possible solution is to move the route temporarily inland for a few kilometres beginning at the Booterstown Dart station before reconnecting with the coast in the Sandymount-Ringsend area.

However, Dún Laoghaire-Rathdown Fine Gael councillor Barry Ward thinks this solution “completely defeats” the purpose of the project as it brings cyclists and walkers away from the seafront and back on to a busy traffic route.

While sympathetic to the NPWS’s position, he believes a solution which “would inconvenience the birds rather than displace them” can be found.

Apart from the tourism benefit, Mr Ward believes the S2S project could transform the several seafront communities which, he says, are disconnected from the sea amenity despite their proximity. He blames the impasse on Dún Laoghaire-Rathdown council.

“I’m very frustrated with the way this project has been dealt with by the management of Dún Laoghaire Rathdown County Council. Every councillor supports it; we have repeatedly raised the issue in the council; we have asked them [the management] for ways forward and all we’re hitting is a blank wall every time.

“The officials in Dún Laoghaire do not want to push this project and I’m at a loss, in many respects, to explain why.”

When contacted, the council said the project remained a core objective and formed part of its 2010-2016 development plan. However, it would not be proceeding with the project for now as environmental issues had arisen in relation to stretches of the proposed route. “In light of these issues, the project as originally envisaged is no longer considered feasible.”

In contrast to the south side, the north side of the city is advancing the project with some success. A cycleway now exists from the Alfie Byrne Way in East Wall out as far as Bull Island’s wooden bridge. The National Transport Authority and Dublin City Council recently announced plans to complete the missing 2km section between the bridge and causeway at the Bull Island estuary, which will complete a path and cycleway running all the way to Sutton Cross and beyond.

A public consultation process in relation to the segment finished last week. The council said it received 45 submissions and it expected to bring a report before the council in April.

If successful, this will be the largest section of the overall 22 km S2S route to be completed since the idea was first promoted in 2001. Dublin City Council is still considering a number of routes for linking the S2S route, which ends at East Wall, to the city centre and across the Liffey into Ringsend.

Another aspect may involve the Poolbeg sewage treatment plant in Ringsend, which is planning to build an undersea tunnel to discharge treated sewage offshore. This will involve the excavation of up to 50,000 tonnes of earth not suitable for construction because of its pyrite content but which would be suitable to building the bank on which the S2S could reside.