How do you carry a flame on a plane?

Flight carried four flames in case a back-up was required 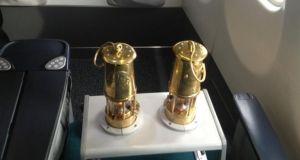 A photograph of two of the heat resistant miners’ lamps carrying the eternal flame on an Aer Lingus transatlantic flight. Photograph: Mark Little via Twitter

Here’s a question: how do you carry a flame (even an eternal one) on a scheduled transatlantic flight?

Well, the process goes something like this. For starters, there are four flames rather than one to make sure there is a back-up in case one, or two or even three extinguish during the flight.

The flames were accompanied by an Aer Lingus engineer with fire marshal experience.

Luckily for Aer Lingus they had a template in the transportation of the Olympic flame around the world.

As carrying a flame on a passenger airline is somewhat irregular permission from the every-wary American airport authorities and their Irish equivalent was required in advance.

1 All students will not return to school even if social distancing rules are relaxed – McHugh
2 Emily Maitlis thanks BBC viewers for support after Cummings row
3 Church closes its doors after flouting public health rules
4 ‘Stick to the guidelines’ – People warned not to gather in crowds as sunny weekend approaches
5 Miriam Lord: Taoiseach is trapped in a Zoom session from hell
Real news has value SUBSCRIBE