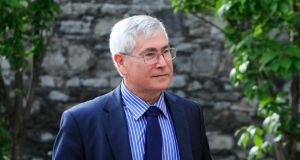 Two women had their wombs needlessly removed, an expert witness has told a medical council fitness to practice inquiry.

Yesterday was the fifth day of the inquiry into allegations of poor professional performance against Dr Peter Van Geene, a consultant obstetrician and gynaecologist, in the cases of four patients who had a hysterectomy at Aut Even Hospital in Co Kilkenny and allegedly suffered significant post-operative complications.

The former master of the Rotunda Hospital and its current clinical director Dr Peter McKenna told the inquiry that there was a pattern of poor professional performance carried out by Dr Van Geene.

“Looking at the pattern of the outcomes and the alleged exchanges I would have concerns about the poor professional performance of the individual,” Dr McKenna told the inquiry.

Dr McKenna told the inquiry that a hysterectomy for a patient identified as Patient A was the “wrong operation” and an inexplicable decision by Dr Van Geene which amounted to poor professional performance.

Dr McKenna prepared an expert report in May and July of this year on the allegations of poor professional performance against Dr Van Geene.

Dr McKenna said it was not appropriate to perform a hysterectomy on Patient A in April 2009 if Dr Van Geene believed the post-menopausal bleeding to be due to stress caused by the patient’s husband being ill.

He said he had never heard anyone suggest that stress causes post-menopausal bleeding.

“If an undergraduate student told me post-menopausal bleeding was caused by stress I would fail them,” he said.

It is alleged he carried out a vaginal hysterectomy without carrying out necessary investigation to establish if it was clinically justified.

“It would be like if you had indigestion and you decided to remove the stomach - it does not make sense,” he said.

He said Dr Van Geene should have done other checks, including imaging and a second D&C to rule out cancer.

Dr McKenna said in the case of Patient B, who had a hysterectomy in July 2010, she was at significant risk of collapse or cardiac arrest due to blood loss.

He said that in elective gynaecology surgery, this level of blood loss was a rare and very significant event.

Dr McKenna said that, as a standalone event, it was not poor professional performance, as any doctor can have a significant post-operative complication.

However, he said Patient B should have been told the blood loss happened and Dr Van Geene should have apologised and accepted responsibility.

Ms Cruise waived her anonymity for the inquiry.

Dr McKenna said Ms Cruise’s problem was incontinence and the hysterectomy did not improve her condition and that a different operation, such as a bladder neck buttress operation, should have been carried out.

Earlier, Dr Prasad Penugonda, a consultant anesthetist at Aut Even, told the inquiry he had no concerns about Mr Van Geen.

It is alleged Mr Van Geene failed to obtain a consent form in the correct manner from patient Helen Cruise when she underwent a hysterectomy operation.

Helen Cruise told the inquiry on Tuesday she was asked to sign the consent form for the operating procedure while she was moments after she was given anaesthetic and before the hysterectomy operation.

Dr Penugonda disputed what Ms Cruise said and that he would never carry out an anaesthetic unless a consent form had been signed. He said that Ms Cruise was stable after the operation but she had a bleed following the operation and needed to be returned to theatre for a laparotomy.

He said he was called back to the hospital for the second operation and that Ms Cruise required six units of blood to be transfused.

He said he had no concerns about Mr Van Geene as a surgeon and described him as professional, courteous, a team player and a good communicator. He said they have worked together for four years and they had carried out many operations together.

Ms Cruise alleged on Tuesday that Mr Van Geene told her following the hysterectomy that he had thrown her womb into a bucket on the floor.

Dr Penugnonda said the nurse usually disposed of the uterus and he did not recall Mr Van Geene saying that.

The inquiry continues on Monday when Dr McKenna will be cross-examined.