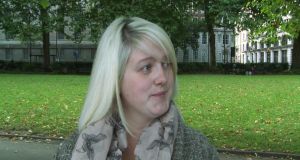 A woman who is carrying twin girls with a fatal foetal abnormality has appealed to the North’s Minister for Health Edwin Poots to allow her have an abortion in Northern Ireland.

The woman, who is almost 22 weeks pregnant, said she was very recently informed that her babies have anencephaly and had no chance of survival. She is now arranging to travel to England for an abortion.

“I find it very hard to come to terms with everything that has happened over the past week,” said the woman, known as Laura, yesterday.

With anencephaly there is an absence of a major part of the brain, skull and scalp in the foetus. Babies are stillborn or usually die within a few hours or days.

The woman spoke on BBC Radio Ulster’s Stephen Nolan programme yesterday morning 24 hours after the programme ran a story about Sarah Ewart, a Northern Ireland woman who had an abortion in London after her baby was also discovered to have anencephaly.

Under current Northern Ireland legislation, foetal abnormality is not recognised as grounds for abortion in itself, although if it were determined that it constituted a serious threat to the physical or mental health of the woman it would be. Laura said that deciding to have the abortion was “one of the hardest decisions in my life”.

‘Horrendous’
She said she only found out about her condition when she went for her five-month scan. “I think it’s horrendous the fact that I have to go to a different country where I don’t know anybody and have to go through something like that,” she said.

Her partner, Chris, said they were “very anti-abortion in any other circumstances” but believed abortions for anencephaly should be available in the North. “We would like to be given the option, like any family in our position, to get the treatment that we require in our own country and have our families around us,” he said.

Consultation
A consultation is taking place about changing the current guidelines on abortion in Northern Ireland.

The 1967 British abortion Act does not apply in the North. About 40 legal abortions take place annually in Northern Ireland, where termination is permitted where it is “necessary to preserve the life of the woman or there is a risk of real and serious adverse effect on her physical or mental health, which is either long-term or permanent”.

Minister of Justice David Ford said there appeared to be a “need to widen out that consultation to look at difficult issues like foetal abnormality to see if where the law is currently drawn is in the right place”.