What’s the secret to the world’s oldest woman’s longevity? 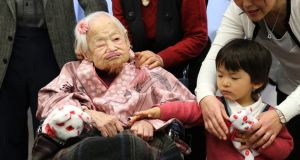 Happy Birthday Misao Okawa. The world’s oldest woman is 117 today. And it’s not surprising that she lives in Japan, which has the highest life expectancy in the world. In 2013, life expectancy for women in Japan was 86.61 while for men it was 80.21 years.

It is also the country with the highest proportion of centenarians (347 for every one million inhabitants in 2010). So what’s the secret? According to a 2011 analysis published in The Lancet Japanese longevity is down to a combination of diet, equality and public health measures.

As the country experienced rapid economic growth in the late 1950s and 1960s, the government focused on investing in public health through universal health insurance and childhood vaccination programmes. It successfully tackled high rates of stroke with salt reduction campaigns and blood pressure control measures.

In a notably homogenous and egalitarian society, disparities in health across regions and socioeconomic groups are fairly small, although a recent rise in income inequality may pose a threat for future health and longevity. And an emphasis on a balanced, rice-based diet is also a major factor.

Research presented at a recent Economic and Social Research Institute conference showed a significant increase in life expectancy in the Republic during the most recent economic boom. But this “longevity bonus” was not shared equally across social groups: while death rates among male professionals, managers and the self -employed decreased by 27 per cent between the 1990s and 2000s, mortality among working class males actually increased by about 4 per cent.

However, there is a downside to populations living longer. With lower birth rates and increased longevity, developed countries will soon have “unbalanced” populations. By 2050, about 40 per cent of Japan’s population will be over 65 as the overall number of inhabitants continues to drop. From an economic perspective this means a lower tax base to support the needs of older people.

As we live longer the number of chronic diseases we experience accumulates. While trying to maximise our quality of life in these twilight years, our health care needs will increase. Indeed, for many people, the goal is to maximise the years of independence in old age – ideally followed by a short period of acute illness prior to our demise.

Longevity is a complex issue; its “secret” remains well hidden. Which makes Okawa’s repsonse to media questions asking if she had discovered the secret of living a long life -“Well, I don’t know” – refreshingly honest.