Warning over ‘casual’ attitude to antibiotics 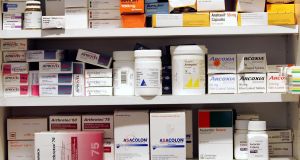 Doctors have warned against the over-use of antibiotics. Photograph: Brenda Fitzsimons/The Irish Times

A casual attitude to antibiotics is damaging their effectiveness and we seeing an alarming global rise in so-called ‘superbugs’, doctors in Ireland have warned.

Consultant microbiologist Dr Fidelma Fitzpatrick, HSE/RCPI clinical lead, said there was a rise in drug-resistant bacteria that cause pneumonia and meningitis, MRSA and E.coli.

Misuse of antibiotics threatened to undermine the progress made in medicine over recent decades. Their overuse also made patients less likely to respond to treatment.

Launching the action on antibiotics campaign to mark European Antibiotic Awareness Day, Dr Fitzpatrick said: “Taking antibiotics when they aren’t needed means that they might not work when you really need them for a serious infection.

“That is why the action on antibiotics campaign - supported by the Department of Health, Health Service Executive, Irish College of General Practitioners (ICGP), Irish Pharmacy Union, Royal College of Physicians and Royal College of Surgeons in Ireland - is aiming to raise public awareness on the correct use of antibiotics and to preserve this precious resource for the use of future generations.”

“Before antibiotics were available, common injuries such as cuts and scratches that became infected could result in death or serious illness because there was no treatment available.

“Thankfully, this does not happen anymore as we have antibiotics available to treat these infections. However antibiotics must be used appropriately and by misusing them we face the risk of returning to the pre-antibiotic era.”

Clinicians warned that antibiotics should be used only as prescribed and only when needed.

They would not work for colds or flu.

In addition, patients should always finish a prescribed course of antibiotics – even if they felt a lot better.

President of the ICGP, Dr Seamus Cryan said that the organisation had been actively encouraging lower usage rates for a number of years across its membership.

Leaflets and posters are being circulated to all GPs and pharmacies nationwide to promote the campaign.