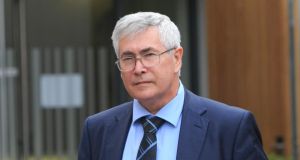 An obstetrician accused of poor professional performance should have stopped carrying out hysterectomies if there were repeated complications, a Medical Council fitness-to-practise inquiry heard.

This is the sixth day of the inquiry into allegations of poor professional performance against Dr Peter Van Geene, a consultant obstetrician and gynaecologist, in the cases of four patients who had a hysterectomy at Aut Even Hospital in Kilkenny and allegedly suffered significant post-operative complications.

The former master of the Rotunda Hospital and its current clinical director, Dr Peter McKenna in testimony as an expert witness, told the inquiry previously there was a pattern of poor professional performance carried out by Dr Van Geene.

“Looking at the pattern of the outcomes and the alleged exchanges I would have concerns about the poor professional performance of the individual,” he told the inquiry on Friday, adding that two women had their wombs needlessly removed by Mr Van Geene.

Dr McKenna said it was not appropriate to perform a hysterectomy on Patient A in April 2009, if Dr Van Geene believed the post-menopausal bleeding to be due to stress caused by her husband being ill.

On Monday, Eugene Gleeson SC, for Dr Van Geene, said he would be calling the former master of the National Maternity Hospital, Dr Peter Boylan, as an expert witness.

Mr Gleeson said Dr Boylan will give evidence that where there is recurrent post-menopausal bleeding and malignancy has been excluded, it is acceptable to perform a hysterectomy.

He said hysteria is linked to the Greek word for womb and linking the womb to emotions or stress was a form of thinking that went back “thousands of years” and has long since been disregarded.

Dr McKenna said in the case of Patient B, who had a hysterectomy in July 2010, she was at significant risk of collapse, or cardiac arrest due to blood loss.

He said that in elective gynaecological surgery, this level of blood loss was a rare and very significant event.

“In a straightforward vaginal hysterectomy operation, someone requiring six units of blood is way beyond the terms of normal pathology,” he said.

Mr Gleeson said that Dr Van Geene was not informed until 15 hours after the hysterectomy that she had been bleeding for nearly 12 hours and this delay had contributed to the blood loss suffered by Patient B.

In relation to the third patient, Helen Cruise, Dr McKenna said she was treated under the National Treatment Purchase Fund and that he would not be happy to operate on a patient he had not met with before.

Ms Cruise had a hysterectomy in August 2011 and Dr McKenna said this was not the right operation because urinary incontinence does not require surgery and there was no justification in doing surgery that would not cure the problem.

Dr McKenna said there was pattern of post-operative complications associated with hysterectomy operations carried out by Dr Van Geene.

He said two patients had required six units of blood each while another had required four following hysterectomy operations carried out by Dr Van Geene.

“There are three very substantial episodes of blood loss which to me warrants closer looking at and an explanation. It would be exceptional in one patient let alone three,” he said.

He said if it was him, he would have stopped carrying out that type of operation.

“I would be unhappy if this is what I left in my wake,” he said.

Dr McKenna said if a similar pattern of complications had arisen in another maternity hospital, they would pick up on this pattern at earlier stage that they were at Aut Even Hospital.

When asked by the committee what Dr McKenna would do if he had experienced a number of post-operative complications following the same operation, he replied: “Stop doing what you’re not good at.”

Dr McKenna said that 80-100 hysterectomies were carried out per year at the Rotunda Hospital and he could not recall any patients requiring so much blood following the operation.

He said when it happens to three patients or more in a short period of time, it is not a random occurrence but arising from a deficit in care along the way.

The inquiry will resume on September 23rd.