‘The best I ever had’: Patients give hospital food rave reviews 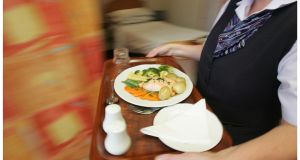 Patients have given hospital food rave reviews in the first ever reports into the quality of nutrition in the Irish health system. Photograph: Alan Betson/The Irish Times

Patients have given hospital food rave reviews in the first ever reports into the quality of nutrition in the Irish health system.

“Amazing”, “Best I ever had”, “tasty” and “favourable” were some of the descriptions used by patients at the Royal Victoria Eye and Ear Hospital in Dublin to describe the food served to them.

Inspectors from the Health Information and Quality Authority said all the patients they interviewed spoke positively about their food. The Hiqa inspectors observed meals as they were being served and found the food was served “in an appetising way”.

It was a similar story at St Luke’s Hospital in Kilkenny, where patients described their food as “excellent”, “beautiful” and told inspectors it “tasted well”.

Hiqa staff were again on hand to watch the meal of boiled bacon, cabbage and vegetables served up and they found it was served in an appetising way.

The quality of hospital food has long been a bugbear of patients and successive ministers for health have promised to make improvements.

Hiqa was asked to carry out unannounced inspections of nutrition and hydration in public hospitals and has just published its first three reports - with surprising results.

At St Columcille’s Hospital in Loughlinstown, Dublin, all patients who spoke with inspectors were complimentary and satisfied with the taste of the food and drinks provided. They were also satisfied with the choice offered, though the Hiqa report describes the variety of choice on the hospital menus as limited.

The main meal was fish or meat, but staff said scrambled eggs or shepherd’s pie were available as alternatives.

Patients in St Columcille’s were more muted in their enthusiasm, describing their food as “tasty” and providing a “good choice”. All were satisfied with the temperature of the food and said their hot meals were hot on arrival.

Hiqa says the hospital must ensure quality improvement efforts are in place to meet patients’ nutritional and hydration needs. Patients must be screened for the risk of malnutrition and training in the area should be further improved, taking account of patients’ own experiences.

Hiqa says all patients have a right to safe, nutritious food and the provision of meals should be individualised and flexible.

1 Coronavirus: Public urged to stick with ‘tough’ restrictions to allow phase two proceed next week
2 Trump turns to bible for photo op as DC burns around him
3 Covid-19: Easing of restrictions ‘unlikely’ to be speeded-up
4 ‘Frustrated and angry’: Thousands march in Dublin to protest death of George Floyd
5 Today expected to be hottest day of the year so far
Real news has value SUBSCRIBE