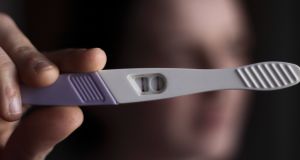 The Department of Health has confirmed 26 terminations were carried out under the Protection of Life during Pregnancy Act last year.

Minister for Health Simon Harris has put a report from the Health Service Executive before the Oireachtas detailing the number of terminations under the 2013 Act from January 1st-December 31st, 2015.

The information published is restricted to limit the prospect of identifying the women involved, according to the department.

The number of terminations is the same as in 2014, and similar to estimates made by doctors who gave evidence to the Oireachtas hearings on abortion in 2013.

The HSE’s report shows that one application for review was made to it and one review was carried out under section 9 of the Act. The review committee found that this application did meet the criteria for a termination of pregnancy under the Act.

The number of applications and reviews carried out by the HSE in 2015 is also similar to the figure they submitted for 2014.

The Protection of Life During Pregnancy Act 2013 was enacted on July 30th, 2013, and commenced on January 1st, 2014. In order for a termination to take place, two medical practitioners have to examine the woman and jointly certify that the risk to her life can only be averted by carrying out the procedure.

1 Kanye West says he will run for US president in 2020
2 Bobby Storey: The IRA's planner and enforcer who stayed in the shadows
3 Arson attack at home in Dundalk leaves five in hospital
4 Trump vows to ‘safeguard’ America’s values and defeat 'radical left, anarchists, agitators, looters'
5 Covid-19: Travel restrictions to stay and 'green list' put on hold amid fears of second wave
Real news has value SUBSCRIBE