Detox promises to give digestive system a good kicking 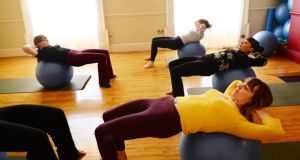 ‘Detoxes are rubbish – they’re all gimmicky, with that maple syrup.” This is a common reaction when I tell people I’m engaging in a 10-day detox. Celebrities have given detoxing – along with The Ivy, Burberry and marriage – a bad name.

Collins English Dictionary defines the detox as a “treatment designed to rid the body of poisonous substances” and helpfully suggests “alcohol and drugs” as examples.

According to Bridgette (better known as Jett) Horszowski of the Qi Rooms pilates studio on Dublin’s South William Street, it’s not just drink ’n’ drugs our bodies need to detox from.

Modern life is a minefield of substances that slow us down (simple sugary carbohydrates such as white bread and pasta) or unduly speed us up (caffeine, sugar and fizzy drinks), and Horszowski’s alkaline detox is designed to give the body a break from the rigours of Noughties life.

It will, I am promised, give me more energy, improve the quality of my sleep and give my digestive system the kick it needs to function properly. (This would be some feat; I suffer from irritable bowel syndrome that worsens with stress and, as a result of the antidepressants I have been prescribed, my sleep is broken and unsatisfactory, with vivid dreams.)

Before starting, Horszowski emails guidelines and explains how the diet will work. It doesn’t sound too bad – no wheat, no dairy, no sugar, no caffeine, no red meat, low gluten and no alcohol, but substitutions can be made: porridge for breakfast with Kara coconut milk; spelt bread and brown rice or spelt pasta.

Acupuncture sessions
There are eight in our group. We meet one chilly Saturday evening in the Qi Rooms to pick up our Chinese herbs (which will, allegedly, keep cravings at bay and improve sleep) and have the first of our acupuncture sessions, with the aim of staving off sugar and caffeine cravings.

We have been told to start our new ways of life that morning, and by 5pm I have a crippling headache – with a seven-cup-a- day coffee habit, caffeine-free living won’t be easy – and am nervous about this new way of life I have signed up for.

The intro session is the easiest thing I’ll do all week, despite the fact that the acupuncture proves surprisingly painful – “that’s because you’re so blocked up with toxins”, says Horszowski, perkily popping pins into my flesh. There is more than one repeat offender in the group, which is heartening.

Day two and the most disgusting part of the detox is imminent: the liver flush. As part of the regime, we are to drink a revolting mixture of grapefruit and lemon juices, garlic, grated ginger and olive oil, once a week, on a relatively empty stomach and to avoid any activity for a few hours afterwards.

Being told to avoid post-liver-flush activity quickly reveals itself, as a point, to be somewhat moot. I feel so nauseous that I can barely stomach Breaking Bad ’s routine violence and I feel queasy well into the evening, when I force down some chicken and vegetables with brown rice. I feel the absence of soy sauce (which contains yeast) keenly, but I endure.

Day three and the headache remains, although it’s fading. Another of Horszowski’s rules is that all drinks are consumed at room temperature, so there’s no cold water allowed. I drink herbal tea pretty much non-stop, which quickly becomes boring.

Caution is advised
Breakfast of porridge with coconut milk is delicious and dried cranberries add the sweetness I’m missing from my sugar-laden diet. But caution is advised – some dried fruit contains artificial sweetener, while others are sweetened with just fruit juice, which is obviously infinitely preferable.

On the fourth day, my headache finally disappears, although I feel light-headed, as if I’ve given blood on an empty stomach (something I have, against my better judgment, actually done).

I’m drinking herbal tea like it’s going out of style. My dreams are more vivid than ever before, and despite sleeping for a record 10½ hours, I feel really tired.

One of the biggest changes becomes apparent to me on day four, too; I eat out a lot, either lunch with friends, or work-related dinners, and take frequent coffee breaks. But being on a limited diet forces me to explore other options: I go to a café renowned for its herbal teas and discover that fennel tea is delicious; I try out a vegetarian place and thoroughly enjoy my food; I opt for tap water instead of Diet Coke and hot water instead of coffee and am no less satisfied (and slightly richer) when the bill comes.

On day five, I realise something embarrassing: usually, I experience a lot of wind- related discomfort. Since eliminating wheat, dairy, sugar and fizzy drinks from my diet, my stomach has unbloated itself and feels much lighter. It’s a detox miracle. I cook sea bass for dinner with stir-fried greens in an orange and honey dressing and feel incredibly smug. It is delicious, which helps.

It’s day six before I encounter what I knew would be my biggest hurdle – the lure of the Indian takeaway. My boyfriend and I are prone to ordering at least one a week, and for me it’s usually a creamy curry with a Peshwari naan. I toy with the idea of bowing out altogether (“no thanks, I’ll just be over here, munching on this carrot”) and then take a second look at the menu; once I put my creamy-curry-blinkers on, there’s plenty I can eat. I go for chicken tikka pieces, okra and daal. Delicious.

Lighter stomach
A week in and I feel good – clear-headed, light of stomach and wind-free – when I’m invited for lunch in one of my favourite eateries, an Asian fusion restaurant that serves some of the most delicious spring rolls on the market.

I become the annoying person talking about her diet (“you see, I’m on this detox . . . ”) and order the coeliac vegan options, of which there are surprisingly many. I do well in avoiding anything in pastry or batter, but when the soy sauce appears, I dig in. I turn to Horszowski – via the Facebook support group she has set up – for help.

“Just a wobble,” she says, comfortingly.

The following day – eight and counting – I go for lunch again, to a restaurant that specialises in delicious (and sadly verboten) steak. I go for seared tuna with polenta fries and gobble every one, despite the fact that they contain evil dairy in the form of Parmesan. I turn down the offer of dessert and sip on a peppermint tea, feeling ever so slightly bitter (but mostly smug).

We have our second acupuncture session and, unlike last week, the needles go in with very little discomfort. I don’t know if it’s that I knew what to expect or if I should believe Horszowski, who says my system has cleared out.

Day nine and it’s almost over, but first – the second liver flush. I don’t know if this is also a figment of my imagination, but it doesn’t taste half as foul as it did last week and I almost enjoy it.

I go to the parents’ for dinner, but Mother Dearest does not understand the concept of detoxing – about which she had been warned – and serves white rice and meringue (not together). I can’t resist. “It’s fine,” says she of the meringue. “There’s only about a teaspoon of sugar in it.”


Joy of detoxing
On the final day, I am ravenous. I start off with two poached eggs with half an avocado, have home-made butternut squash and courgette soup for lunch with some sourdough bread and finish off with an avocado sandwich on sourdough, as well as, of course, approximately 20 cups of herbal tea.

So how do I feel after 10 days? I feel smug. The overriding joy of detoxing is in being able to tell people that you are detoxing and watch their caffeine-addicted faces fall.

But if I delve a little deeper, there is no doubt that my body has functioned better for these 10 days than it has in as long as I can remember.

I have no stomach cramps, no wind and no bloating. My mood has been more or less steady. I am sleeping better (albeit with crazy dreams) and I have more energy during the day.

I don’t know what side of the fence I’m on when it comes to the concept of detoxing. Do we need it? Is sugar really all that bad? Will caffeine kill me eventually?

But I know how it felt to treat my body to a diet of clean food and clean living for 10 days and it felt pretty damn good.