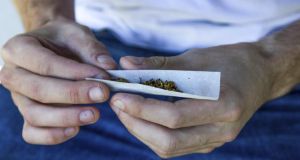 Young people who take cannabis regularly are over 60 per cent less likely to finish school or get a degree compared with those who have never used the drug, according to a study published today in The Lancet.

These effects were found even after researchers controlled for factors such as age, gender, ethnic background, socio-economic status, use of other drugs and mental illness. The risks increased relative to dose, with daily cannabis users showing the strongest effects.

Cannabis is the most widely used illicit drug globally and its popularity is growing with young people. There are no figures for cannabis use among Irish under-15s, said Dr Joe Barry, head of the department of public health in Trinity College Dublin, but studies by the National Council on Drugs and Alcohol have found 4.5 per cent of 15- to 34-year-olds took the drug in the previous month.

In the study, a team of Australian and New Zealand researchers combined data from three large, long-running studies to find out more about the link between the frequency of cannabis use before the age of 17 and developmental outcomes such as educational attainment, depression and welfare dependence.

They found “clear and consistent” association between frequency of use of the drug during adolescence and most of the outcomes measured.

Dr Barry said the study appeared to confirm earlier findings about the harm associated with cannabis use and its role as a gateway drug. There were particular problems around the availability of high-strength cannabis in inner-city parts of Dublin, he said.

“You’d have to conclude that liberalising cannabis would do more harm than good. And the more you can get young people to delay or avoid taking psychoactive drugs, the better.”

According to the study’s lead author, Dr Edmund Silins, “Efforts to reform cannabis legislation should be carefully assessed to ensure they reduce adolescent cannabis use and prevent potentially adverse effects on adolescent development.”

“Our findings are particularly timely given that several US states and countries in Latin America have made moves to decriminalise or legalise cannabis, raising the possibility that the drug might become more accessible to young people”, says Richard Mattick, study author and Professor of Drug and Alcohol Studies at the University of New South Wales, Australia.