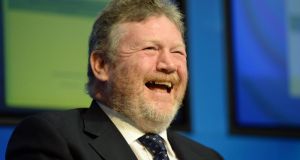 Former minister for health James Reilly: his spokesman said he had moved to correct a “historical underfunding” in Dublin North. Photograph: Frank Miller

Dr Reilly approved 17 grants nationally against the advice of officials, including three based in his constituency and three with links to Mayo, Taoiseach Enda Kenny’s constituency, the briefing note shows.

In the case of 26 projects approved for funding by department officials, Dr Reilly increased the amount paid.

Dr Reilly is on holiday but his spokesman said yesterday he moved to correct a “historical underfunding” in Dublin North by boosting funding in the area for two years. The level was lowered in 2013.

“Minister Reilly had noted the significant underfunding in Dublin North historically and [he] proactively gave it a boost in 2011 and 2012 but pulled it down again in 2013.”

Previous ministers for health overruled advice from officials when they regarded the recipient organisation as deserving, the spokesman said.