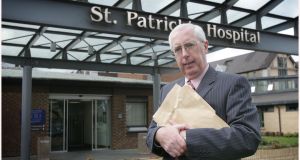 The payment of a personal cheque by Dr John Griffin (above) to a patient as a full and final settlement of a complaint, without admission of liability, was “unconventional”, an investigation by St Patrick’s Mental Health Services has found. File photograph: Brenda Fitzsimons/The Irish Times

A consultant psychiatrist paid a long-time patient €50,000 as part of a “gentleman’s agreement” after he threatened to report him to the Medical Council, an investigation by the State’s largest private mental health service has found.

The payment of a personal cheque by Dr John Griffin to the patient as a full and final settlement of a complaint, without admission of liability, was “unconventional”, the investigation by St Patrick’s Mental Health Services found.

The payment “could be construed as an effort to thwart a complaint to the Irish Medical Council”, a report compiled by a three-person investigation team found.

In the months before the payment was made in 2012, Dr Griffin sent the patient a series of personal letters about his own medical issues. The report found this could be considered to breach the standard of behaviour or communication expected of a consultant psychiatrist.

“The letters could also be viewed as a way to prevent [the patient] making a complaint to the Irish Medical Council, which he is entitled to do,” it found.

The investigation was held after the patient complained he was over-prescribed benzodiazepines for a protracted period. He also alleged Dr Griffin told him that his experience of childhood sexual abuse was of no relevance to his symptoms and neglected to take it into account when managing his condition.

Dr Griffin no longer works at St Patrick’s and is in private practice in Dublin. Contacted by The Irish Times, he declined to discuss the issues raised by the patient, citing reasons of confidentiality.

The patient was treated privately by Dr Griffin at St Patrick’s between 1988 and 2013. Throughout this time, he prescribed benzodiazepines for the patient, who was originally diagnosed by another doctor as having anxiety and an obsessive personality.

The report found Dr Griffin’s prescription was excessive but did not contravene prevailing practice and guidelines “given the circumstances of prescription history and use of benzodiazepines”.

It acknowledged that benzodiazepines should be prescribed for short-term use only but said there was “significant latitude” for doctors treating people with an already established long-term use of the drug.

Action should have been taken sooner to address the resulting psychological issues after the patient revealed to Dr Griffin an experience of childhood clerical sexual abuse, according to the report.

The report said it did not appear that steps were taken to treat the psychological issues associated with this abuse.

“While Dr Griffin reported during interview that he had provided extensive psychotherapy to [the patient] after he had made the revelation of abuse, his private notes make no reference to this psychotherapy.”

Dr Griffin failed to adhere to guidelines on abuse reporting from 2009 onwards, the report also found. It was not until early 2014, when another psychiatrist reported the abuse, that the guidelines were adhered to.

The report found it was a matter for the Medical Council to determine whether its guidance on professional conduct and ethics had been breached. “Some aspects of Dr Griffin’s communication with [the patient] fell well below the standard expected by St Patrick’s Mental Health Services and, in the circumstances, SPMHS should support [the patient] if he chooses to report his concern to the Medical Council.”

Man tried to steal cars while high on crack and holding chihuahua 17:51
Coronavirus: One death, 25 new cases reported in State 17:49
Judge gives landlord a week to halt Covid-19 parties near UCC 17:32
Brightest comet of the century visible in Irish skies for the next week 17:09
Planning permission granted for Waterford North Quays 16:55