Minister Leo Varadkar says it will now be independent body, not ‘sub-agency’ of HSE 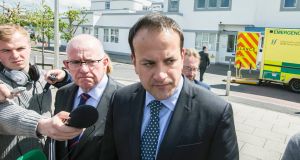 Minister for Health Leo Varadkar said he disagreed with the original plan for the group to be part of the HSE structure. Photograph: Brenda Fitzsimons / The Irish Times

The Department of Health last year halted preparations for the establishment of a new patient safety/advocacy body – one of the key recommendations of the Hiqa report into the Portlaoise hospital controversy.

Official health service files maintain that senior HSE managers were urged by the Department of Health to exclude any reference to the proposed agency in the executive’s service plan for 2015.

Minister for Health Leo Varadkar, who following the publication of the Hiqa report on Portlaoise said a patient advocacy body would be set up, said yesterday that he had disagreed with the original model proposed for the organisation.

Under original plans the Patient Safety Agency was to have been established initially on an administrative basis within the structures of the HSE. At a later date it was to be set up as a standalone organisation.

Mr Varadkar said last night that he preferred to have a fully independent body from the start. He feared people might not have trusted a patient advocacy organisation that was closely linked to the HSE.

The establishment of such a patient safety/advocacy agency had been a key priority of former minister for health, James Reilly. It was to be one of a number of organisations established as part of health reforms leading to universal health insurance.

Official HSE files, seen by The Irish Times, show considerable advance planning had been carried out by the middle of 2014 on the Reilly initiative for a Patient Safety Agency.

A corporate structure had been suggested for the body, including an overseeing board, an annual budget of about €1.45 million proposed and a recruitment competition for a chief executive launched.

In February 2014 the HSE director general Tony O’Brien had proposed that the agency, as then envisaged, would have three functions: informing patients, advocating for patients and managing and learning from patient complaints.

However the files show that from last autumn, following the departure of Dr Reilly, the steam appeared to run out of the project as originally proposed.

In a letter to Jim Breslin, the secretary general of the Department of Health, on December 12th, Mr O’Brien said during the autumn “we have been requested not to specifically reference progression of the Patient Safety Agency (or as per my more recent correspondence Patient Advocacy Agency) in the service plan”.

He said the recruitment process for a chief executive had been paused.

“I am conscious that at this time we must either complete or cancel the recruitment campaign and I am concerned to ensure that the HSE and the Department of Health are fully aligned in any approach we take to this matter.

“The cancellation of the recruitment campaign requires communication from us to each of the shortlisted candidates telling them that the establishment of the Patient Safety Agency is not proceeding at this time.”

Mr Varadkar said on Sunday: “I decided that the patient advocacy service should be set up independent of the HSE from day one. Before I was appointed Minister for Health, the plan was to create some sort of sub-agency within the HSE. But in my view it should not be part of the HSE at all.

“I didn’t think that people would trust a patient advocacy service to advocate on their behalf to the HSE, if the people working in it were employees of the HSE. That is why the HSE was told to take it out of the service plan. The Hiqa recommendation actually supports my view.

“Plans now in place will see the creation of a fully independent advocacy service, the department’s own patient safety functions will be strengthened, and the role of the Ombudsman in dealing with additional complaints is being extended.”

Mr O’Brien, as an alternative, suggested in correspondence to the Department of Health that an enhanced information and advocacy support system for health service clients could be developed by means of an arrangement with the Citizen’s Information Board.