Nurses feel ‘abused’ by State and will ballot for industrial action

INMO chief signals ban on redeployment, overtime and cross-cover ‘as a first step’ 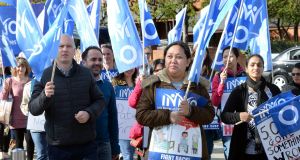 The INMO signalled it would seek “immediate acceleration” of the reversal of pay cuts and pension levies, as well as the additional unpaid hours imposed under the Lansdowne Road and previous agreements. Photograph: Eric Luke/The Irish Times

Nurses feel “abused” by the State and will vote on industrial action if bed numbers and services are not reduced in line with available staffing levels, the Irish Nurses and Midwives Organisation (INMO) has said.

The union also called for the “immediate acceleration” of pay and pension restoration following cuts during the economic crisis. The threat of industrial action does not however apply to this issue.

INMO general secretary Liam Doran, who outlined the plans at a conference on Thursday, said the ballot would take four to five weeks but would not comment on a timeframe beyond that.

Such action, he said, would include “as a first step” a ban on redeployment, cross-cover in the community and overtime.

INMO first vice-president Mary Leahy said nurses had shouldered much of the burden during the economic crisis but had been “disrespected” by the State. “We have given enough,” she said.

“It’s time nurses and midwives were respected. I’d go as far as to say we feel abused and we feel the Government owes us an apology. That’s how strongly we feel.”

The executive council of the union held a special meeting earlier this week at which the Lansdowne Road Agreement was considered, as well as the “chronic shortage” of nurses and midwives in the context of the improving economic situation.

It was agreed that current pay levels, following pay cuts and pension levies, are “inadequate” in terms of attracting and retaining nursing and midwifery staff, and are “wholly inadequate” to provide safe care for the numbers of admitted patients.

“Nurses and midwives are working excessively long hours, some of which are unpaid, under excessive pressure, and are in many cases burnt out at the end of a shift,” said Mr Doran.

“This situation is unsustainable, unacceptable and dangerous for our members and in contravention of the employers’ obligations under health and safety legislation. What’s being proposed now is not tenable and has to be revisited by Government.

“Staffing levels are unsafe and nobody is respecting, in management, the professional judgment of nurses and midwives who are saying this environment is unsafe.”

Mr Doran said the INMO would seek “immediate acceleration” of the reversal of pay cuts and pension levies, as well as the additional unpaid hours imposed under the Lansdowne Road and previous agreements.

Furthermore, he said “special incentive measures” were required to recruit and retain staff in sufficient numbers. According to INMO figures, there are almost 4,000 less nursing and midwifery posts in the health service than in 2008.