New bedside test for sepsis may save thousands of lives

British scientists say test will give results within two hours 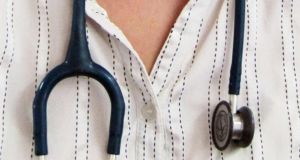 Junior doctors have voted overwhelmingly to take industrial action over their campaign to reduce “dangerously long” working hours. It is alleged in October 2012, Dr Ahmed failed to order chemotherapy treatment for a patient despite being reminded and requested to do so by the Chief Oncology Pharmacist at the hospital. Photograph: Hugh Macknight/PA Wire

A new bedside blood test for sepsis has the potential to save many thousands of lives, scientists have said.

The life-threatening condition is caused by an overwhelming immune reaction to infection that damages tissues and organs.

The condition came to public prominence in Ireland during the case of Savita Halappanavar, who was 17 weeks pregnant when she died from sepsis on October 28th last year following a miscarriage.

Rapid diagnosis and treatment with antibiotics is essential, but it can take up to two days to analyse samples in a laboratory.

Now British scientists have discovered a biomarker in the blood that can identify sepsis at the bedside within two hours.

Certain microRNAs, short strands of the genetic molecule RNA, were more likely to be found in the blood of patients with sepsis.

MicroRNAs alter the activity of genes and are known to influence disease processes.

Professor Graham Lord, director of the National Institute for Health Research (NIHR) Biomedical Research Centre at Guy’s and St Thomas’ NHS Foundation Trust and King’s College London, said: “Sepsis is a hidden killer, causing nearly a third of all hospital deaths. Rapid antibiotic treatment for the condition is vital — every minute counts. Yet current diagnostic methods can take up to two days, so an accurate diagnostic test that can be carried out at the patient’s bedside is urgently needed.

“We have for the first time identified a group of biomarkers in the blood that are good indicators of sepsis. We have shown that it is possible to detect these markers by screening a patient’s blood in the ward, a process which can deliver results within two hours. This is an extremely exciting development which has the potential to completely transform the management of this severe disease and save thousands of lives worldwide every year. These are promising early findings, and now we need to test this approach in a large clinical trial.”

Initial results from laboratory tests were validated in a large group of Swedish patients with severe sepsis. The research, published in the online journal Public Library of Science ONE, showed that it was possible to diagnose sepsis within two hours with 86 per cent accuracy.

Symptoms of sepsis are similar to other types of inflammation affecting the whole body but only sepsis responds to antibiotics.

It is important to distinguish sepsis from other forms of Systemic Inflammatory Response Syndrome (SIRS), the researchers point out. Administering antibiotics in non-sepsis cases can help to fuel antibiotic resistance.

“Not only would an accurate diagnostic test improve outcomes for patients, but it would contribute to tackling the ongoing problem of antibiotic resistance by allowing clinicians to distinguish between SIRS and sepsis and diagnose these severe conditions more accurately,” Prof Lord added.

Plans are under way for a randomised clinical trial at King’s College London and Guy’s and St Thomas’ NHS Foundation Trust.