NAGP claims GPs who signed under-six deal were ‘under duress’ 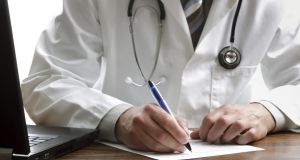 The National Association of General Practitioners (NAGP) has claimed that the “vast, vast majority” of GPs around the country who have signed the contract to provide free care for under-sixes have done so “under duress”.

The association has called on Minister for Health Leo Varadkar to meet members to discuss concerns over the contract and the future of general practice.

It also assured parents that doctors who have not signed up to the scheme are not abandoning children in that age group and will try to get the HSE to cover the cost of GP visits.

Speaking at a meeting in Clonmel in south Tipperary – the area with the lowest rate of GPs signed up to the under-six contract – Dr Yvonne Williams of the NAGP said if she were to become part of the scheme she would have a patient wait-time of a week by September or October because of the expected increase in GP visits by parents with young children.

“These general practitioners in Clonmel have shown great integrity in the face of intimidation for months,” Dr Williams said.

“They’re standing up for their patients.”

“There will be an inevitable knock-on effect ... resulting in shorter consultation times and fragmentation of care. Expect increased use of A&E departments, paediatric units and private clinics.”

Dr Rouse is one of 44 GPs in south Tipperary who have not signed the new contract, but he said parents can continue to bring their under-six children to their practices.

“Where contracts are not in place either due to a parent or doctor not registering, we will not be unreasonable and will do everything to facilitate the HSE covering the costs incurred.”

The Irish Medical Organisation, which represents more than 2,000 GPs, backed the deal to provide free GP care to all children under six but it was rejected by the NAGP, which is understood to have around 1,200 members.