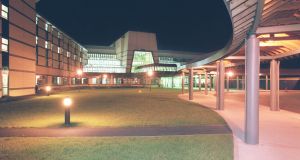 Electroconvulsive therapy (ECT) provision at the acute psychiatric unit of Tallaght hospital was not in compliance with the code of practice, according to the Mental Health Commission. Photograph: The Irish Times

The way in which some patients are physically restrained and secluded, and the standard of some premises, are criticised in the latest inspection reports from the Mental Health Commission.

Electroconvulsive therapy (ECT) provision at the acute psychiatric unit of Tallaght hospital was not in compliance with the code of practice, according to the commission.

There was no evidence of physical examination of three patients who received ECT, the report says.

Its policy on seclusion was criticised because of an “obvious blind spot”.

“This created a notable concern in terms of meeting the criteria of direct observation whereby a registered nurse is within sight and sound of the seclusion room, allowing for visual assessment of behaviour to be made at all times, but is outside of the seclusion room.”

Inspectors found the physical restraint of two residents were properly recorded but criticised involvement of security staff with no knowledge of the patients’ care plans.