Fears of growing isolation among over-65s as younger generations emigrate 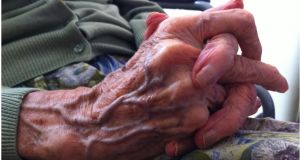 Social isolation among older people - those aged 65 years and over - puts ageing populations at a higher risk of dementia, cardiovascular disease and decreased immune system responsivity, according to the Alone charity. Photograph: Bryan O’Brien / The Irish Times

Loneliness among older people is believed to be as damaging to their health as smoking 15 cigarettes a day, with older generations at risk of increased isolation as young emigrants move abroad, according to the Alone charity.

Social isolation among older people - those aged 65 years and over - puts ageing populations at a higher risk of dementia, cardiovascular disease and decreased immune system responsivity, according to the Irish charity.

The latest figures from the Central Statistics Office show there are 586,600 older people over the age of 65 in the State.

Seán Moynihan, chief executive of Alone, says older people living alone often have limited social interaction with the outside world and are at risk of taking less exercise, often leading to ill-health including depression.

“Just under a third of older people live on their own and that number will continue to climb,” said Mr Moynihan. “Loneliness has become a chronic situation and is affecting older people’s well-being.”

“It is vitally important that as we age we maintain strong links with our local community.”

Research carried out by The Irish Longitudinal Study on Ageing (Tilda) in 2014 found mothers of children who had moved abroad in recent years had experienced an increase in depressive symptoms and feelings of loneliness.

Mr Moynihan worries that we have yet to see the real affects of emigration among the older generations left behind in Ireland.

“The age that people emigrate, their parents are usually in their late 50s. We’re only seeing the effects five to seven years later. People settle down abroad, don’t come home and parents can end up becoming isolated.”

According to the Centre for Ageing Research and Development in Ireland (Cardi), depression is set to become the second leading cause of disability worldwide by 2020. The growing rate of depression is expected to disproportionately affect older adults.

Cardi warns that depression among older people tends to go undiagnosed and is often accepted as a natural part of the ageing process.

“Over the next 30 years, 20,000 people will turn 65 every year, that’s 400 people a week,” said Mr Moynihan. “Older people need good services of a consistent quality, to ensure that they don’t slip through the cracks and become isolated from other people.”

“The key is to keep linked in and to keep active.”

Mr Moynihan recommends older people who feel socially isolated should sign up to the Alone Befriending Service which matches volunteers with vulnerable older people who they visit every week.

“There is a difference between befriending and ‘being friendly’, while it’s wonderful to say hello to your older neighbour when you see them on the street, that small interaction alone won’t stave off loneliness.”