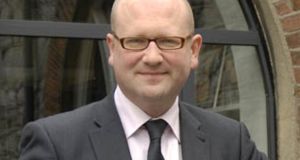 
Labour TD Gerald Jed Nash has said he was bullied as a teenager after being diagnosed with Crohn’s disease.

Last week Mr Nash was addressing the largest meeting of specialists in the field of inflammatory bowel disease (IBD) in Europe.

Mr Nash told the European Crohn’s and Colitis Organisation (Ecco) annual gathering in Copenhagen that bullying made it harder for him to come to terms with having Crohn’s disease, one of the two illnesses that make up IBD. The other is ulcerative colitis.

The chronic illness can lead to embarrassing symptoms including an urgent need to go to the toilet and severe stomach cramps.

Mr Nash said that when he was diagnosed at the age of 15, his fellow students would taunt him about his condition.

He maintained that the best thing that has happened IBD patients has been the roll-out of self-management and IBD nurse programmes.

The largest survey of patients with IBD to date in Ireland found they believe hospital facilities are inadequate.

St Vincent’s gastroenterologist, Dr Glen Doherty, who carried out the survey, found that at 45 per cent of centres, patients did not have access to an IBD nurse specialist.

Dr Doherty said nurse specialists were an efficient way of dealing with IBD patients and their absence led to more stress on the country’s gastroenterologists who were already overburdened.

There is one gastroenterologist in Ireland for 125,000 people; the equivalent figure in the UK is one per 50,000.

The survey was carried out among several hundred patients at 20 sites across the country.