Keeping focused on eradicating a life-long and killer disease 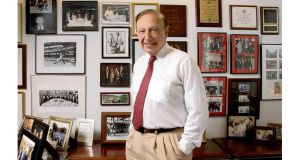 "We now have one of the great epidemics of all time in our face: HIV," says Dr Bob Gallo

While we may be on high alert for other infectious diseases, HIV should not and cannot be forgotten, writes CLAIRE O'CONNELL

JUST WHAT is it about HIV/Aids that makes it such a persistent global epidemic? What can we learn from diseases past? And how can we ensure the world is ready for future devastating viral epidemics?

Those are some of the topics to be covered at the University of Limerick tomorrow by Dr Bob Gallo, who co-discovered, with Luc Montagnier, in the early 1980s that HIV causes Aids.

His ambitiously titled talk – Viruses, Epidemics and Putting an End to Deadly Diseases in the 21st Century– will look at lessons from the Spanish flu, polio and particularly HIV/Aids, his own area of research. Just before each of those epidemics took hold, people didn’t take infectious disease seriously, according to Gallo, who is professor of medicine at the University of Maryland, where he directs the Institute of Human Virology.

“If you read the history, just before the so-called Spanish flu killed so many people in 1918-1919, people were thinking that epidemics of fatal infectious diseases were something of a previous century,” he explains.

Likewise, just before polio hit the US in the middle of the 20th century, funding into infectious disease was losing traction. “The sudden, viral horrifying global epidemics were passé and people said money should be turned over to study degenerative diseases: cancer, brain diseases, arthritis and so on.”

There was a similar lull in infectious disease research before HIV struck in the early 1980s, he notes.

“I arrived in the National Cancer Institute in 1965 and there was a serious search for viruses involved in human cancer and a serious respect for infectious disease as potentially new epidemic disorders,” he recalls. “By 1975 the virus cancer programme had been killed and people had come to the conclusion that no virus was involved in human cancer and almost certainly would never be.”

Yet a few years later, those biases had been smashed. “Viruses are now known to be involved in about 20 per cent of all human cancers, maybe more, and we now have one of the great epidemics of all time in our face: HIV.”

So why is HIV so hard to eradicate? Part of the problem is that the virus quickly integrates its genetic information into the human’s DNA, explains Gallo. “It establishes a life-long infection, so that’s a long time to be passing something around,” he says. “And it’s extremely hard to completely eradicate every last virus particle from an individual. It is in your DNA and if you kill the cells that harbour it, how do you know you have killed the last one?”

Compounding the problem is the fact that most people infected with HIV live in developing countries, making it more difficult to provide treatment. For those who can get it, drug therapy has made strides in allowing people with HIV to live a reasonable life, notes Gallo, but what’s really needed is a vaccine to prevent infection. The variety of HIV types around the world makes this tricky and, in general, trials have delivered disappointing results, but a recent outcome in Thailand could offer a glimmer.

Initially, Gallo and other scientists had expressed reservations about the study of 16,000 volunteers, but he says the trial results ultimately showed the vaccination programme had an effect in the early days. “It worked, but all the positive data are in the first six months and after that there’s no protection. So whatever worked stopped working, and we have a good idea of what that might be,” he says. “I think it’s down to a special category of antibodies that were induced, and it fits with some ideas that we are working on.”

Gallo is understandably reserved about predicting the outcome of research in train, but he believes it could produce interesting results.

Meanwhile, he is keen to keep HIV in the media spotlight. “It doesn’t mean we push away any other concern or any other work, it means please don’t forget about it,” he says. “I feel it’s important to be on guard for H1N1, H5N1, the whole works, but remember HIV is still there and you just can’t assume that it is taken care of.”

He is also an advocate of setting up linked centres of excellence around the world to build up expertise across all classes of viruses. “You need to have the research situation at a highly charged level, solving certain problems,” he says. “If we don’t do this, when Aids gets boring and influenza is not in the news the guard will go down. And you simply don’t know what kind of viruses are going to emerge and cause a problem.”

Tomorrow Prof Robert C Gallo will give a free, public lecture at 7.30pm in the Jean Monet Lecture Theatre, at the University of Limerick. This coincides with UL’s annual research forum, where the HSE’s Dr Kevin Kelleher will speak (2.30pm) about swine flu developments

33.4m:people living with HIV/Aids worldwide in 2008. The vast majority were in low- and middle-income countries.