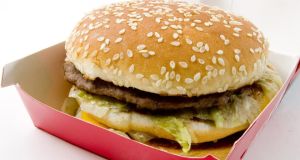 Food companies are increasingly using hidden tactics and emotional persuasion to market unhealthy food to young people online, according to a report.

The growth in digital marketing of unhealthy food and drinks highlights the need for tough new regulations to protect children’s health, according to the Irish Heart Foundation, which commissioned the report.

Existing curbs on television advertising aimed at children should be extended to all media, the report recommends.

It also says a ban should be introduced on sporting heroes and other celebrities popular with young people promoting food and drink that is high in fat, salt or sugar.

One-quarter of the social media posts by brands analysed did not show food, packaging or a logo, indicating a shift to “more subtle promotional strategies that are less easily identified as advertising”.

The report said social media posts for junk foods were designed to “evade children’s ability to process consciously that posts are marketing that seek to sell”.

Parents generally know little about the efforts being made to influence their children online, the report, by child psychologist Dr Mimi Tatlow-Golden, says.

Junk food companies and their marketing advisers are targetting children with “subtle, sophisticated and surreptitious methods in an environment where parents don’t know what’s going on - and can’t easily find out”, she said.

“The Government has no option but to regulate digital marketing of junk food. The alternative is to allow children’s long-term health to be put at severe and continuing risk.”

The report finds many of the big food and drink brands are not currently using websites to promote their products to children.

One in 10 brands has a site with child-directed content, and one in five has content appealing to older children and teens.

The picture changes dramatically on Facebook, where all the brands with the greatest reach among 13-14-year-olds are active and featuring unhealthy products.

These brands actively seek to recruit Facebook users to spread their marketing through likes, tags, comments and photos.

Parents, when shown examples of these posts, switched from initial indifference to a negative reaction, according to the report.

They were “very hostile” to the use of tagging, sharing and the promotion of unhealthy products using celebrities.

Examples quoted include an advertisement for Supermac’s burgers featuring Ireland rugby star Seán O’Brien and the promotion of Coca-Cola by singer Rita Ora.

The report, which is being examined by the World Health Organisation, will be submitted to Minister for Communications Denis Naughten this week.

1 Ireland could lose out as France lays claim to most of €5bn Brexit compensation fund
2 Miriam Lord: The Dáil's answer to John Wayne overcooks the ham slice, by slice, by slice
3 Q&A: What restrictions are going to be lifted next week?
4 Boy (4) left in hospital for over two years due to Tusla and HSE failings, report says
5 Majority of Covid-19 outbreaks in last week were in private houses
Real news has value SUBSCRIBE