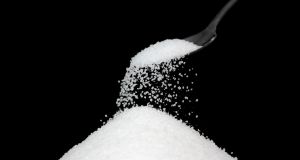 A sugar tax is widely expected to be introduced in the budget. Photograph: Getty Images

One in three young people are drinking sugar sweetened drinks on a near daily basis, according to new research.

More than 411 million litres of sugary drinks were sold in Ireland in 2014, an Institute of Public Health in Ireland conference will hear on Tuesday. This is equivalent to more than 1.2 billion cans, or about 200 per person per year.

The budget is widely expected to include the introduction of a sugar tax from 2018, as part of measures to tackle rising obesity levels.