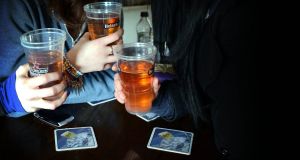 Prof Aiden McCormack of the Irish Society of Gastroenterology accused the alcohol industry of a “conflict of interest” in promoting moderation while at the same time trying to sell product. Photograph: Brenda Fitzsimons/The Irish Times

The alcohol industry’s efforts to curb excessive drinking are ”a joke” and actually encourage greater consumption, leading doctors have claimed.

Industry-sponsored campaigns by drinkaware.ie are really subliminal advertisements to encourage people to drink and young people are “blind” to their calls to “enjoy drink sensibly”, according to the Royal College of Physicians in Ireland.

Professor Aiden McCormack of the Irish Society of Gastroenterology accused the alcohol industry of a “conflict of interest” in promoting moderation while at the same time trying to sell product. The advertisements were a waste of money and the funding should be used instead for research into alcohol-related liver disease, he said.

Drinkaware.ie said last night Prof McCormack’s view was misleading and not based on evidence. “Some 87 per cent of our target audience drink alcohol. Simply telling people not to drink is unrealistic,” Fionnuala Sheehan, chief executive of the initiative, said.

She said drinkaware promotes moderation for people choosing to drink but advised others, and those in circumstances such as driving or engaging in water sports, that it is best not to drink at all. The industry spends over €20 million in cash and in kind each year on the initiative.

Prof McCormack was speaking at the launch of a policy statement by the college, which calls on the Government immediately counter the “shocking” level of harm caused by alcohol by introducing minimum pricing and curbing sports sponsorship by drinks companies.

Members of the alcohol policy group said they were particularly alarmed at a dramatic rise in chronic drink-related conditions among younger people.

Prof McCormick said many people were in denial about the scale of the problem. “In obituaries, people never die in the liver ward because their families don’t want anyone to know alcohol was involved.” He said he gets requests from families to remove mention of alcohol from relatives’ death certificates because they want the issue “swept under the carpet”.

The group wants the Government to introduce measures proposed in the national substance misuse strategy report over a year ago. The implementation of these proposals has been delayed by disagreements between ministers over the recommendation to restrict the sponsorship of sports and cultural events by alcohol companies.

With sports organisations claiming they will suffer if this proposal is followed through, the group acknowledges the recommendation is controversial.

It says however that there may be other sponsors interested in the marketing opportunity created by the gap in sponsorship.

Prof Joe Barry of the TCD’s department of public health medicine said he was disappointed the sporting organisations had swallowed the alcohol industry’s line on sponsorship “hook, line and sinker”.

The idea that they could only get funding from drinks companies because no-one else had money “can’t be true”.

He called on the Government to prioritise public health over commercial interests and to adopt a similar approach to reducing alcohol consumption as it had to cutting road traffic deaths.

Prof McCormack said it isn’t just heavy drinkers who are exposed to the harm caused by alcohol. People who drink at lower levels may also be at risk if they have other underlying conditions such as being overweight or having hepatitis or haemochromatosis. Alcohol was a risk factor in seven types of cancer.