'I think nothing of just popping out for a 10k' 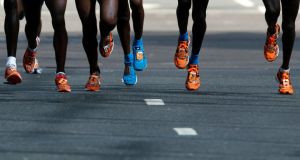 MY RUNNING LIFE: KILLIAN BYRNE went from being a couch potato to marathon runner in just 10 months

When did you start running and why?

I was selected as a leader on the RTÉ TV programme Operation Transformation that started on January 2nd, 2012. I was 19½ stone and I managed to jog only 200m in a fitness test. There was a strong history of obesity-related illness in my family. My father had his first heart attack at aged 41 and, unfortunately, passed away after a stroke at just 51. I needed to make serious changes to my lifestyle and set out to do so before I was 40. Despite being completely inactive for about six years, I had just seven weeks to prepare for a 5k.

What has been your biggest achievement?

Going from an inactive couch potato to marathon runner in just 10 months. Having never run outside of rugby training back in my 20s, it was great to discover that the hardest thing really is putting on the runners. Now I think nothing of just popping out for a 10k if I have some spare time.

The fact that I can call myself a distance runner is something I never would have dreamed of, ever. It is also really rewarding to see my young children growing up knowing that exercise can make a huge difference in life. Running, with them following me on their bikes, is the most cherished time I have.

What’s the best thing about running?

There is a huge amount of time to think about things that would traditionally get pushed to the side if I was just sitting at my desk. I can get everything sorted from the week’s shopping list to any changes to my pension that need to be made. I’ve met loads of people through running forums and at races and there is a real sense of camaraderie among us all.

I live close to Marlay Park with loads of different tracks and trails that change colour with the seasons, it is a really beautiful place to run. It is also strangely comforting to know that I train in the same place as Olympian Linda Byrne, who regularly zips past me like she’s just effortlessly popped out for a pint of milk.

What are you training for now?

I’m training for the Great Limerick Run marathon in May 2013. My current plan is to train smart and stay injury free. I don’t think I treated Dublin with the respect a marathon deserves, and winter will be spent on strength and working on my core muscles.

I have also learned that running slow is the new fast, it’s really great, whoever came up with that was a genius.

Not as much as I should do, but during periods of really big mileage it was necessary to make sure I could get back out the following day.

I was once given a present of a foam roller, they are modern forms of torture.

Have you a good or bad diet?

I try to have the best diet I can, I still follow the recipes from Operation Transformation but perhaps not as rigidly. The main change to my diet is to ensure I have healthy food to snack and to watch my portion size.

I’m just building up the mileage now after post-marathon recovery but hopefully by December I’ll be training five days a week with one fartlek session, one tempo run, two easy distance and a long slow run at the weekend. On top of that the aim is to do 15 minutes’ core work five times a week before bed – I’m tired just thinking about it.

What do you wear on your feet?

Have you ever been chased by an animal?

One weekend when visiting relatives in Ballinasloe I headed out for 12 miles early one Saturday. A straight road, six miles out, six miles back. At about four miles, someone’s best friend, but certainly not mine, bounded over a hedge and contributed to the fastest 100 yards I have ever run. The return distance was stretched out a little as I had to detour through a field as I saw him just standing there, keeping guard, waiting for my return.

“The mind always gives up before the body.” It is true, our legs will carry us further than we would ever consider once we ask them nicely.