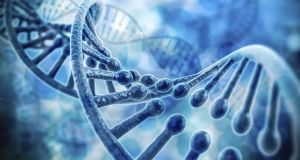 Hundreds of families with inherited conditions who have been waiting up to two years for an appointment at the State’s main genetics centre are being deprived of their entitlement to treatment abroad. File photograph: Getty Images/iStockphoto

Hundreds of families with inherited conditions who have been waiting up to two years for an appointment at the State’s main genetics centre are being deprived of their entitlement to treatment abroad.

Two UK clinics have offered to help clear the huge backlog at the clinical genetics service in Our Lady’s Hospital in Crumlin, Dublin, according to documentation seen by The Irish Times.

Under an EU directive, Irish people can avail of healthcare in other member states but they have to be on a public waiting list.

Five per cent of the population is affected by genetic disorders and may require testing or counselling in relation to conditions that may be passed on in the family.

These may involve cancer, cystic fibrosis, Huntington’s disease or even learning disabilities.

Many of the families waiting for appointments in Crumlin are not included on official national waiting lists because of administrative shortcomings.

This means they cannot avail of the option of treatment abroad.

The Government has provided the National Treatment Purchase Fund (NTPF) with €15 million to help clear waiting lists from next year.

A total of 1,800 patients are waiting to see a genetic consultant or counsellor at Crumlin, according to the hospital, up from 1,500 at the end of last year.

Waiting lists have continued to increase despite restrictions on lower-risk referrals imposed in 2012.

The hospital says urgent cases are prioritised but informed sources say the waiting time for a priority appointment can be up to 12 months.

“There are an estimated 300,000 people in Ireland affected by rare diseases, yet while most of these conditions are genetic in origin, clinical genetic services in Ireland are significantly behind our EU neighbours.”

Ireland ranked last of 14 European countries for the number of genetic consultants per head of population, according to a study published last year. Northern Ireland was ranked sixth in the same survey.

The Republic employs one genetic consultant per 1.15 million of the population, despite having the highest birth rate in Europe, it found.

About 4,500 patients attend the centre each year, though often more than one person in a family is seen per appointment.

The centre is unusual in that, although based in a children’s hospital, it sees both adults and children.

Crumlin made a business case for additional staff in both 2015 and 2016, a spokeswoman said.

It had a national remit until 2015, when it was fully subsumed into hospital structures at Crumlin.