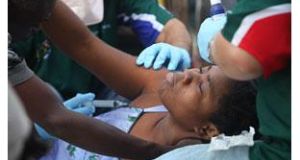 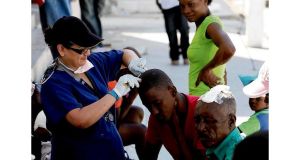 A doctor from the Cuban Medical Centre cares for patients on the street. Photograph: Brenda Fitzsimons

Hundreds, probably thousands, of patients are lined up on mattresses under tarpaulins and tents. Sweating in the sun, brushing away flies, doctors in surgical garb move from one bed to another.

Dr Vladimir Laroche, a Haitain internist who practised in New York for the past 15 years, called the medical emergency “a catastrophe on top of the catastrophe”. Since flying in after the quake, Dr Laroche has concentrated on cardiac problems and diarrhoea.

The medical emergency is compounded by the long-standing “brain drain” of Haitian doctors to the US, Canada and Europe, and by the deaths of so many Haitian medical personnel in the earthquake. One hundred and fifty nursing students died at the country’s main nursing school, adjacent to PaP General. Their smudged and torn diplomas could be found in the rubble outside.

“A lot of wounds are becoming infected,” warned Dr William Gregor, a specialist in emergency medicine from Los Angeles. Haiti’s tropical heat, the failure to change dressings, and poor timing means that anti-antibiotics are often ineffective.

“I saw more loss of limbs yesterday than in 15 years of emergency medicine,” Dr Gregor said. “Twenty amputations in one day, upper and lower extremities, and there are hundreds more to be done. It’s a mass casualty event.” Dr Gregor suggested that Haiti will resemble post-war countries like Liberia, which have a high percentage of amputees because of landmines.

Dr Dave Bielema, an orthopaedic surgeon from Grand Rapids, Michigan, was most impressed by the sheer volume of work, and the disorganisation. He treated only broken limbs, the most common injury in the quake.

There are more medical teams than operating rooms at PaP General, so doctors work in shifts round the clock. “We’ll work all night tonight, wearing headlamps,” said Dr Bielema.

Most of the open fractures have already been treated. “We’re seeing gangrene and closed fractures now,” Dr Bielema said. “There are few new problems arriving, though we got a gunshot a few minutes ago.”

In addition to the quake injuries, the doctors are treating victims of violence related to looting, and normal cases, such as elderly stroke patients, a woman who suffered from third-degree burns after a cannister of cooking gas exploded, and childbrith.

Many of the “guillotine” amputations done in the frantic hours after the quake are now being repeated, higher up on the limb. “This island will require many thousands of prostheses, and a great deal of reconstructive surgery,” said Dr Jim Ringler, another US volunteer. “We are running by the seat of our pants, with very few X-rays. We are just extrapolating. It’s not how we usually do it.”

As they worked their way down the seemingly endless rows of patients, the doctors wrote instructions in felt pen on casts, such as “Back to OPD 30/1”. With some two million homes destroyed and food and water in short supply, it is difficult to discharge patients. Dr Bielema told a leg amputee to go home as soon as he was comfortable with his crutches. “It’s too far. I don’t have any money,” the man replied.

Doctors at PaP General usually wait for a dose of Ketamine to be administered before conducting painful wound cleaning and dressing. The drug “separates your brain from your body”, explained Dr Gary Rogers from the Children’s Hospital in Boston.

According to Dr Donald Weston, who came with Dr Bielema from Grand Rapids, Ketamine is the perfect anaesthetic for this disaster. “It puts you in a trance for 15 minutes. You can drink it, inject it, put it in an IV. With 1,000 vials of that, I can do anything.”

The drug is less used in the US because of possible side effects, particularly “emergence delirium”. In Haiti, that’s not a problem. “Compared to what they’ve been through, emergence delirium is a walk in the park,” said Dr Weston. “When they come out of it, they want to know if they still have a leg.”

Dr Jean-Henold Buteau heads PaP General’s internal medicine department, including the dialysis room where victims of crush syndrome are treated. “In my entire life in Haiti, I had seen two cases of crush syndrome,” Dr Buteau said. “Now we’ve had 25 in 10 days.”

Dr Buteau defines crush syndrome as “massive muscular injuries, often accompanied by nerve and bone injuries, that lead to acute renal failure. The injured muscle cells release myoglobin, which obstructs the tubules in the kidneys. If you don’t get dialysis, you die of kidney failure, from all the waste that accumulates.”

Dearthlie Bernadeau, a third-year Haitian medical student, volunteered to help at PaP General. “We’re going to see a lot of diarrhoea, malaria and tetanus – especially among amputees,” she predicted.

And, she warned, there’s a danger that bacteria will seep from corpses rotting under collapsed buildings into the water table.

“Water is the first priority,” stressed Dr Michel Roulet of Swiss Humanitarian Aid, standing a few feet from a giant water bladder that was flown in from Switzerland. “So much infectious disease is transmitted by water. The second priority is the latrines.”

The Swiss are focusing their efforts on children, who have “exactly the same injuries as adults”, Dr Roulet said. “A lot of arm and leg amputations, and a lot of sepsis. But children are more fragile, both physically and psychologically.”

The most disconcerting thing about the Haitian emergency, Dr Roulet said, was the amount of time it took to get most medical teams working: five days, in the case of the Swiss.

Dr René Brahy, a Belgian volunteer whom I’d met earlier in the operating room at the Médecins Sans Frontières hospital in Cité Soleil, explained the cheerful mood of the doctors in Haiti.

“We work with courage, energy, and dare I say it, optimism,” he said. “Because we are saving lives, and that makes a doctor optimistic.”

amputations in one day at PaP general