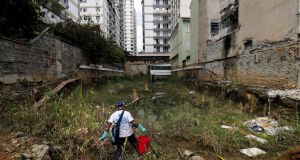 Spain has recorded the first case in Europe of a baby born with the microcephaly birth defect associated with the Zika virus, Spanish health authorities said on Monday.

Though dozens of people in Europe are known to have contracted Zika, usually after spending time in affected countries such as Brazil, it is the first European birth of a baby with the defect by a mother carrying the virus.

The woman had been diagnosed with the virus in May and had decided to keep the baby, a spokeswoman for the regional health authorities of Catalonia, where the baby was born, told Reuters.

The mosquito-borne Zika virus has been linked to hundreds of cases of microcephaly, a rare condition that causes unusually small heads and improperly developed brains in babies. Spain had 190 known cases of Zika infections at the latest count, 189 of which resulted from travelling overseas and one was sexually transmitted.

The woman, who was 20 weeks into her pregnancy when she was diagnosed, had been infected with the virus and with dengue during a trip to Latin America.

Doctors from the Vall d’Hebron hospital in Barcelona said the boy’s condition was “stable”.

“He is being monitored but he doesn’t need any respiratory assistance,” said Felix Castillo, head of the hospital’s neonatal care unit, told journalists.

Meanwhile, authorities in Colombia have declared an end to the Zika epidemic in the South American nation, the second-hardest hit in the region from the virus.

The number of cases of the virus has been falling steadily to as few as 600 per week compared with more than 10 times that amount at the outbreak’s peak in February, the health ministry said.

Since Zika arrived in Colombia in September 2015 there have been almost 100,000 cases reported, although laboratory tests have confirmed only around 9,000.

Despite the lower risk of infection, authorities said that the virus will not disappear completely.

They are also warning that many of the 17,730 pregnant women diagnosed with Zika have yet to give birth so the number of children born with birth defects linked to the virus could rise in the coming months.

So far this year, 150 children have been born with microcephaly. The compares to around 90 cases in recent years before the Zika outbreak. Of the reported cases this year, only 21 have been linked to Zika.

The surge in birth defects has been much more noticeable in Brazil, the country hardest hit by Zika.

The later arrival of the virus to Colombia allowed authorities to prepare a public awareness campaign aimed especially at poor women.

Doctors say there has also been a rise in illegal abortions as many women infected with Zika fear their child could be born with birth defects.