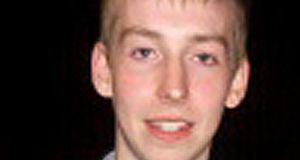 Jonny Byrne (19): well-known local hurler and footballer and a member of the Naomh Bríd Hurling Club and Leighlinbridge GFC.

There has been widespread condemnation of the “Neknominations”drinking challenge following the death of a young Carlow man who took part in the activity on Saturday and died soon after.

It involves people filming themselves drinking, or “necking”, large quantities of alcohol, posting the video online and then nominating two others to do the same within 24 hours.

The body of Jonny Byrne (19) was taken from the river Barrow in Carlow yesterday morning. He had been seen going into the water near Milford Bridge on Saturday evening and a search was mounted. From Tomard, Leighlinbridge, he was a well-known hurler and footballer and was a member of the Naomh Bríd Hurling Club and Leighlinbridge GFC.

His father Joe Byrne urged people to keep away from the drinking challenge. “I’m pleading to every youngster to think of the things they are doing. It has cost my son his life. The whole family is devastated. Our lives will never be the same again. I hope this message is heeded because for us life is virtually over.”

Jonny’s brother Patrick posted a message on his Facebook page on Saturday night, urging people to stop the challenge. “Everyone across the world please like and share,” he wrote. “This neck nomination s**t has to stop right now. My young 19-year-old brother Jonny Byrne from Carlow died tonight in the middle of his nomination.

“He thought he had to try and beat the competition and after he necked his pint he jumped into the river. After five hours of searching he is still not found. If people have any decency and respect, they will refrain from any more of this neck nomination s**t”.

Meanwhile, gardaí at Pearse Street in Dublin are investigating the death of Ross Cummins (22) from Ringsend, whose body was found in a house in nearby Macken Street in the early hours of Saturday morning. A Garda spokesman said the death was not believed to be suspicious. Media reports yesterday linked his death with the drinking activity, but an acquaintance rejected these reports on Twitter, saying they were “very untrue”.

A Garda spokesman said he could not comment on suggestions that the death was linked to Neknominations.

Minister for Children and Youth Affairs Frances Fitzgerald condemned the activity, saying it was a highly dangerous and potentially lethal phenomenon, where an inappropriate peer pressure element added to the risks.

Alcohol Action Ireland had issued a warning about the activity last week and yesterday its chief executive Suzanne Costello expressed concern at the apparent escalation in the activity. “I just hope that this puts a stop to it,” she said.

Meas, the alcohol industry-funded body, also warned people to avoid the activity. “I am asking young people to consider both the risk to their own health and also if they would really want to be the nominator of a friend who takes up their challenge and, in doing so, harms themselves,” its chief executive Fionnuala Sheehan said.

Last week Galway City Tribune reported that people were attempting Jackass-style stunts such as like standing on the roof of a moving car while drinking alcohol. In one video, a student is seen somersaulting off Quincentenary Bridge to catch a can of cider before swimming ashore and drinking it.