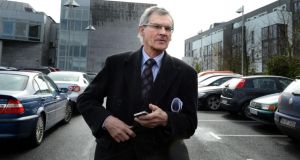 Dr Peter Kelehan told the inquest into the death of Savita Halappanavar that she had had the “classical appearances of septic abortion in the second trimester of pregnancy”, something “rarely seen by pathologists”. Photograph: Brenda Fitzsimons

A retired medical consultant told the Savita Halappanavar inquest in Galway on Thursday that in a career of more than 30 years he had never seen as severe a case of sepsis in a mother as in the case of Ms Halappanavar.

Ms Halappanavar (31) died at University Hospital Galway on October 28th last following a miscarriage. She had been 17 weeks pregnant.

Dr Peter Kelehan, a retired consultant in mother and baby pathology at the National Maternity Hospital at Holles Street, Dublin, reviewed the slides from the postmortem.

He agreed with two other deponents, one of whom was not present in court yesterday, that Ms Halappanavar died as a result of septic shock, causing multi-organ failure, due to the contraction of a particularly virulent form of E.coli, with her miscarriage an additional factor.

Ms Halappanavar’s husband Praveen did not attend the proceedings yesterday, having already indicated he did not want to be present for the pathology reports.

Dr Kelehan said Ms Halappanavar had had the “classical appearances of septic abortion in the second trimester of pregnancy”, something that was “rarely seen by pathologists”.

He said he had seen “four or five” cases of septic abortion since the beginning of his career in 1979. In none had the mother died, though the foetus had in all cases. He said he had seen 700-800 miscarriages per year in Holles Street and though chorioamnionitis (infection of the foetal membranes or sac around the foetus in the womb) was associated with second-trimester miscarriages it was “exceedingly rare to see this level of inflammation”.

Earlier, Prof Grace Callegy, of NUI Galway, the pathologist who performed the postmortem on Ms Halappanavar on October 30th last, described how utterly the sepsis had attacked Ms Halappanavar’s vital organs. She said the most likely source of the acute chorioamnionitis had been the genital tract. There was no other focus of infection.

Prof Callegy said while it was not uncommon to see findings of sepsis or septic shock at postmortem, it was rarely the case in maternal deaths.

An expert report, compiled by Prof Sebastian Lucas at Guys’, Kings’ and St Thomas’s hospitals in London and a world expert on sepsis in pregnant women, was read into the record. He also concluded Ms Halappanavar died of septic shock resulting from E.coli ESBL infection and severe chorioamnionitis with the second trimester miscarriage a co-factor.

1 Hotels, retail, gyms, churches to open next Tuesday, followed by restaurants and gastropubs on Friday
2 Forget Black Friday, welcome to Green Friday - 30 Irish retailers with great deals
3 Exiting Level 5: What will reopen, when will it happen and when will we know?
4 Child (4) stranded on Luas platform when separated from mother, court hears
5 Businesses can show ‘Dunkirk spirit’ by taking new direct ferry to France
Real news has value SUBSCRIBE