Eating bacon, ham and sausages can cause bowel cancer - WHO

Red meat also classified as a ‘probable’ carcinogen, in findings that could sharpen debate over meat-based diets 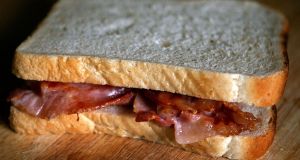 Eating processed meat can cause bowel cancer in humans while red meat is a likely cause of the disease, World Health Organisation (WHO) experts said on Monday in findings that could sharpen debate over the merits of a meat-based diet. Photograph: PA

Bacon, ham and sausages are as big a cancer threat as cigarettes, World Health Organisation experts said on Monday.

In findings that could sharpen debate over the merits of a meat-based diet, they found that eating processed meats can cause bowel cancer in humans while red meat is a likely cause of the disease.

The France-based International Agency for Research on Cancer (IARC), part of the WHO, put processed meat like hot dogs and ham in its group 1 list, which already includes tobacco, asbestos and diesel fumes, for which there is “sufficient evidence” of cancer links.

“For an individual, the risk of developing colorectal (bowel) cancer because of their consumption of processed meat remains small, but this risk increases with the amount of meat consumed,” Dr Kurt Straif, Head of the IARC Monographs Programme, said in a statement.

Red meat, under which the IARC includes beef, lamb and pork, was classified as a “probable” carcinogen in its group 2A list that also contains glyphosate, the active ingredient in many weedkillers.

The lower classification for red meat reflected “limited evidence” that it causes cancer. The IARC found links mainly with bowel cancer, but also observed associations with pancreatic and prostate cancer, it said.

European Commissioner for Agriculture Phil Hogan said the report was likely to have an immediate impact on eating habits.

Speaking at the annual Macra na Feirme conference in Macroom, Co Cork at the weekend he said: “I haven’t seen the report yet but that’s a matter for the Commissioner for Food Health and Safety, so it’s not my direct responsibility. But you can see consumer food sentiment is very fickle and any report like that, inevitably in the short term at least, is going to have an impact.”

“That’s why we have to ensure the European Commission services can give clarification or rebuttal to those scares as quickly as possible,” he added.

An Irish Farmers’ Association spokesman said consuming recommended quantities of red meat is well recognised by medical experts as being beneficial to human health and provides the body with essential vitamins and minerals.

“Red meat is an important part of a balanced diet in most western societies where a plentiful supply of quality foods has added greatly to health and life expectancy,” read the statement.

In a statement on Monday afternoon, the HSE said the report was quite detailed and complex and therefore would “require careful consideration to determine what action, if any, is needed regarding changes to nutritional plans for public health services.”

“The HSE will not be making any further comment until the report and its findings have been fully examined,” it added.

While cancer scientists are concerned about the risks of eating too much meat, some nutritionists maintain that the extra risk is relatively small and that meat has other benefits.

Dr Elizabeth Lund – an independent consultant in nutritional and gastrointestinal health and a former research leader at the British Institute of Food Research, who acknowledges she did some work for the meat industry in 2010 – said red meat was linked to about three extra cases of bowel cancer per 100,000 adults in developed countries.

“A much bigger risk factor is obesity and lack of exercise,” she said. “Overall, I feel that eating meat once a day combined with plenty of fruit, vegetables and cereal fibre, plus exercise and weight control, will allow for a low risk of colorectal cancer and a more balanced diet.”

Prof Ian Johnson, emeritus fellow at the Institute of Food Research, also said the effect was small. “It is certainly very inappropriate to suggest that any adverse effect of bacon and sausages on the risk of bowel cancer is comparable to the dangers of tobacco smoke, which is loaded with known chemical carcinogens and increases the risk of lung cancer in cigarette smokers by around twentyfold.”

“It was clear, sitting in the IARC meeting, that many of the panellists were aiming for a specific result despite old, weak, inconsistent, self-reported intake data,” said Betsy Booren, the institute’s vice-president of scientific affairs. “They tortured the data to ensure a specific outcome.

“Red and processed meat are among 940 agents reviewed by the IARC and found to pose some level of theoretical ‘hazard’. Only one substance, a chemical in yoga pants, has been declared by the IARC not to cause cancer.

“The IARC says you can enjoy your yoga class, but don’t breathe air (class 1 carcinogen), sit near a sun-filled window (class 1), apply aloe vera (class 2B) if you get a sunburn, drink wine or coffee (class 1 and class 2B), or eat grilled food (class 2A). And if you are a hairdresser or do shift work (both class 2A), you should seek a new career.”