Diageo steps down from Stop Out-of-Control drinking board 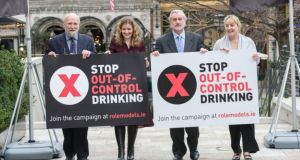 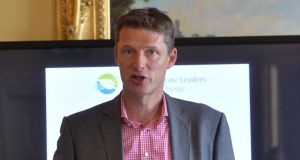 David Smith, director of Diageo who sat on the board, has said he is resigning from this position on the board but the company will still fund the programme. File Photograph: Alan Betson / The Irish Times

Diageo would “have to listen” if a report the drinks giant was funding recommended a ban on alcohol sponsorship of sports and other live events, its chief executive has said.

However, David Smith, who has stepped down from the board of Stop Out-Of-Control drinking campaign amid controversy about the campaign’s independence if he remained on it, noted such bans had not been effective elsewhere.

Mr Smith said he had decided to step down from the board as there had “undoubtedly been a lot of pressure on other board members” because of his presence.

“Each one of the members has given their time and energy to something they really believe in. For them to be called out and for there to be the suggestion that they were naive or had been hoodwinked on some way, it was unfair. So I decided it was the right thing to remove myself to remove any question about the independence of the campaign.”

Stop Out-of-Control Drinking, which was established last month to develop a strategy to reduce alcohol abuse, has been criticised as it is funded by Diageo, one of the biggest alcohol producers in the world.

Questions were raised about the board’s independence given the inclusion of Mr Smith. The campaign is inviting submissions from the public and is also holding work-shops to develop ideas. It will write a report with recommendations before the summer.

Mr Smith said he communicated his resignation to the other board members on Tuesday. “I think they were quite disappointed it has come to this,” he said. “The next time we will see the report is when it is published. There will be no input from Diageo.”

Asked how Diageo would react to the inclusion of recommendations that could impact on alcohol sales, such as a complete ban on alcohol advertising, or alcohol sponsorship of sports and other events or other measures he said the company would “have to listen”.

“I would support regulation of advertising. If they recommend an end to sports sponsorship we have to listen to that. But it’s worth remembering it has been tried in France where they have had such a ban for 20 years and teenage drinking has gone up there, whereas it’s going down in Ireland.

“It might well be in the report but alongside regulation we need to tackle the culture and develop a different relationship with alcohol. I want my two young sons to emerge into an Ireland with a very different drinking culture. I want it to be uncool to get drunk. It’s much more deep-rooted than regulation.”

Fergus Finlay, chair of the campaign and chief executive of Barnados, said Mr Smith’s resignation was in response to the “huge controversy” about Diageo’s involvement in the campaign.

“David never interfered or tried to control. He was on the board because he wanted to be involved and supportive and part of the solution,” he said. “He’s left the board for precisely the same reasons.”

Mr Finlay said Diageo’s funding, of about €1 million to date, has allowed to campaign to be started. Mr Finlay said Goddard Global, a UK based lobbying firm with links to Diageo, remained as secretariat but did not have any decision making involvement.

St Patrick’s Mental Health Services withdrew from the campaign in recent days, and GP and health commentator Dr Ciara Kelly and psychologist Krystian Fikert of the MyMind mental health centre recently resigned from the board.

Minister for Health Leo Varadkar said he welcomed Diageo’s decision to leave the board.

“I don’t think it’s appropriate that the drinks industry should be actively involved in campaigns around public health for the obvious reason,” he said.

A statement from the campaign said it welcomed Diageo’s decision to continue to fund the campaign.