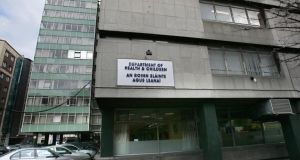 The guidelines, on implementing the Protection of Life During Pregnancy Act, were drawn up by the Department of Health and are for all clinicians who may be involved in managing pregnant women

Detailed guidance on the circumstances in which a woman may legally have an abortion – when there is a real and substantial threat to her life – have been circulated to some health professionals.

The guidelines, on implementing the Protection of Life During Pregnancy Act, were drawn up by the Department of Health and are for all clinicians who may be involved in managing pregnant women.

The Protection of Life During Pregnancy Act came into force on January 1st, setting out for the first time the circumstances in which a woman may legally access an abortion.

The new guidelines outline procedures to be adhered to by clinicians, including GPs, midwives, psychiatrists and obstetricians when there is a real threat to a pregnant woman’s life that can only be averted by a termination of pregnancy. The threat can be physical, a physical emergency or by suicide.

The guidelines go into great detail on when a woman is pregnant and suicidal. They say when there is suicidal intent, a termination is legal where three doctors have examined the woman and “have jointly certified in good faith that:

b) this risk is one that can only be averted by a termination of pregnancy, and

c) the medical practitioners have, in good faith, had regard to the need to preserve unborn human life where practicable”.

One of the doctors must be an obstetrician-gynaecologist and two must be psychiatrists.

When a woman completes her first assessment with a psychiatrist and he or she is of the opinion that she is suicidal and requires a termination to avert suicide, he or she “will certify on the prescribed form and seek a second psychiatric assessment for the patient”.

If both psychiatrists agree she needs a termination she will then be referred to an appropriate obstetrician/ gynaecologist for the procedure.

The guidelines say that “where practicable” the woman’s GP should be consulted. “However, this consultation can only take place if the woman consents to it,” they say.

The guidelines say decisions should be made expeditiously and relayed to the patient. If the psychiatrists do not believe the woman needs a termination to save her life they will set out other options.

Clinicians will not have to assist in or carry out terminations if they object on conscientious grounds. However: “Conscientious objection is not applicable in emergencies where the woman’s life is at immediate risk.”

The Pro Life Campaign today accused the Government of misleading the public on abortion.

“If this were true, it wouldn’t have taken a full year to draw up the guidelines. The truth is the legislation was never about life-saving treatments. It was always about Fine Gael capitulating to the Labour Party, who had campaigned for 20 years for an abortion regime in Ireland. The assurances sought by some Fine Gael TDs prior to the passage of the legislation have now been shown to be worthless.”

Ms Sherlock said the guidelines mean that “all it takes to sign the life of an unborn baby away is for two like-minded psychiatrists to sanction the abortion without having to produce a shred of medical evidence that it would help save the life of the mother”.

She claimed abortion is now legal in Ireland up to birth, based on a threat of suicide, “even though the Government knew before the law was passed that abortion is not a treatment for suicidal feelings”.