Children rated as more sociable in Ireland than UK - research 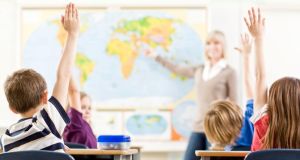 Irish parents rate their children as being more sociable than their UK counterparts, a conference heard today.

A comparative study of almost 40,000 children in both the Republic of Ireland and the UK found marked differences in how parents perceived their children to be coping with the demands of life.

The results were unveiled by at the Psychological Society of Ireland conference in Sligo this morning.

Researchers Jennifer Shore and Dr Raegan Murphy, from University College Cork found Irish parents reported their children as being more “pro-social”, a phrase psychologists use to describe psychological well-being in relation to how people interact socially.

Ms Shore said they did not do a breakdown in the data but she noted a “significant difference” between the perceptions of UK parents and their Irish counterparts.

Using a strength and difficulties questionnaire, they also examined the data in relation to behavioural difficulty as reported by the parents. The questionnaire includes how well a child sticks with a task or how easy they find to share with other children.

English parents reported much more behavioural difficulties with their children in comparison to parents from either Scotland or Ireland.

She also found that all parents reported children had more difficulties if they had a television in their room.

A study of students at University College Cork (UCC) found that 30 per cent conformed to the World Health Organisation (WHO) norms for low risk behaviour in relation to alcohol.

The study of 328 students found almost 18 per cent of students were involved in very risky drinking with 7.3 per cent exhibiting behaviour that was a predictor for alcoholism, according to the research carried out by UCC MA student Kathleen Mulhall.

She cautioned that the findings, which were self-reported by the students, could be on the conservative side.

A study of female suicide over three decades found hanging has increased sixfold since the 1980s.

The research was carried out by Siobhan O’ Connor, the lead author. Dr Raegan Murphy, who delivered the paper, said there was probably a degree of underreporting in the 1980s, but the rise in hanging is a phenomenon that has been observed in other countries. She said that women were choosing more lethal forms of suicide.

The most vulnerable age for women is between 50 and 54 which international research suggests is an age when some women have finished bringing up their children and are struggling to get back into the workplace or find another role.

A study of secondary schools in Ireland has suggested that the overwhelming majority of teachers are aware that cyberbullying is going on in the school. Some 83.8 per cent of a sample from 80 schools were aware of cyberbullying going on.

Some 93.8 per cent of those who responded expressed concern about the impact of cyberbullying on pupils’ welfare. The research was carried out by Trinity College researcher Caroline Wheeler.

*This article was edited on November 26th.