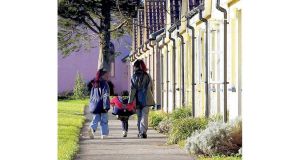 Research at some GP clincis has found that asylum seekers are more likely than Irish citizens to be diagnosed with mental health problems, writes CATHERINE REILLY

WITH THREE asylum seeker hostels in Tralee, Dr Bernard Ruane’s clinic on Ashe Street regularly sees patients from countries such as DR Congo, Zimbabwe, Nigeria and Uganda – and the GP has identified a troubling trend: rates of depression and anxiety among the town’s asylum seekers are “much higher” compared with native locals.

“It starts with the situation they’re coming from,” says Dr Ruane, on the causes of such distress. “A lot of them are coming from countries that you could say are not exactly desirable places. Then they arrive here and they have all day long to be thinking about their situation – asylum seekers are not allowed to go on any [third level] courses and they can’t do any work. Their mental health definitely suffers as a result of that.”

Symptoms of depression often surface within six months of their arrival into “direct provision” centres or hostels, Dr Ruane told last year’s annual general meeting of the Irish Medical Organisation (IMO), and at his clinic the GP tries to avoid prescribing medication in such instances. “It’s really not the solution; it’s a social problem for them,” says Ruane, who recommends involvement in sports.

The number of asylum seekers coming to Ireland has declined sharply since the early 2000s, but asylum-seeking hasn’t ground to a halt. More than 2,500 fresh applications were made this year, with Nigeria, Pakistan, China, DR Congo, Moldova and Zimbabwe the top six countries-of-origin. Currently, more than 6,000 people are accommodated at 50 direct provision centres, contracted to private operators by the Department of Justice. Meals are provided; residents get a weekly stipend of €19.10 per week and are entitled to a medical card.

No extensive research has been conducted on mental health trends among this population, but a 2007 study by NUI Galway’s department of general practice offered a startling snapshot.

The case-controlled research involving two Galway city GP clinics found that asylum seekers were five times more likely than Irish citizens to be diagnosed with a “psychiatric illness”, which included depression and anxiety, and three times as likely to receive a diagnosis of anxiety.

According to co-author Prof Andrew Murphy, the study quoted international research emphasising the need to socially “integrate” asylum seekers affected by emotional conditions rather than automatically adopt a “very psychiatric approach” to their treatment.

“Clearly, it would be reasonable to suggest that some of the underlying psychological distress is coming from the environment that they are now living in,” explains Murphy. “And we need to look at that as much as trying to prescribe medication.”

An Iranian man, Ali*, says his ill-treatment at the hands of his country’s hard-line authorities sparked his problems with anxiety and depression, which he believes the direct provision system worsened.

He immersed himself in volunteering activities throughout the process, but was diagnosed with depression and anxiety by a GP about five months after arriving in Ireland.

Ali recalls that after a five-minute consultation, he received a prescription for antidepressants and a benzodiazepine, neither of which he took for fear of possible side effects. Counselling was never suggested. In early 2009, Ali was granted refugee status on appeal, but says three and a half years of fearing deportation, of not being allowed to work, study or cook his own food at the Co Wexford hostel where he lived, will take time to recover from.

Now enrolled at a top Dublin university, Ali says people assume his life is “rosy”. But he attends a free counselling service at college every week, working with his counsellor to find “strategies” to leave the past behind.

The HSE’s intercultural health strategy acknowledges the negative impact that “extended periods” of living in the direct provision system may have on the health of asylum seekers. The organisation’s plans for 2010 include a “priority action” to progress discussions with the Department of Justice “around addressing the impact of direct provision on the physical and mental health of asylum seekers and refugees”, says a HSE spokesman.

“A dedicated psychology service for asylum seekers exists at St Brendan’s Hospital,” he adds, “while the HSE also funds a number of services delivered by Spiritan Asylum Services Initiative (Spirasi). This NGO provides specialised medical and psychological care to asylum seekers who have experienced torture prior to arrival in Ireland.”

Authorities say efforts are also being made to reduce waiting times. The Office of the Refugee Applications Commissioner says standard cases are decided upon in just over three months from the date of submission, while the Refugee Appeals Tribunal (RAT) takes anything from 22 to 74 working weeks to give standard judgments (most newly received appeals will take around 22 working weeks to assess, according to the RAT). The Immigration, Residence and Protection Bill, meanwhile, includes provisions aimed at quickening the decision-making process.

Yet while much commentary surrounds such proposals and the high rejection rates (around 90 per cent of both initial applications and appeals are rejected), health experts working with the most vulnerable asylum seekers are deeply concerned at the ongoing lack of psychosocial supports for their clients during their stay in direct provision.

The Centre for the Care of Survivors of Torture (CCST) at Spirasi in Dublin assists asylum seekers and refugees who survived torture at the hands of state agents in their countries, estimated at 10 per cent of total asylum seeker numbers. The HSE is among its funders, but it is strongly reliant on volunteer hours from therapists, doctors and other health professionals.

Around 800 people have accessed CCST’s services this year, and coordinator of psychotherapy services Margaret O’Reilly Carroll says the “terrible dependency” and “isolation” of direct provision is often expressed by clients within just weeks of entering the system.

“If you ask them ‘what’s the most difficult thing you’re struggling with at the moment?’ – I did it recently, and I was amazed. They didn’t mention the impact, for some of them, of sexual violence or trauma, or the nightmares, or the loss of their family . . . what they mentioned was the terrible dependency, the nothing to do, their minds going ‘crazy’ thinking – now that’s how people sometimes describe it, their minds going ‘crazy’,” she says.

O’Reilly Carroll says the centre is developing a programme to promote self-help methods among its clients living in direct provision centres, which it hopes to roll out, depending on funding.

“What we’ve been trying to offer is ways to cope with that stress,” says O’Reilly Carroll. “We’re trying to respond as best we can within the system.”

*Not his real name

Reacting to needs of ethnic minorities

‘THERE IS NO word in some languages for depression,” says Margaret O’Reilly Carroll, co-ordinator of psychotherapy services at the Centre for the Care of Survivors of Torture (CCST) at Spirasi in Dublin.

Her remark perfectly encapsulates the complexities of providing mental health services to a culturally diverse clientele, when interpretation is often necessary and western terms such as “counselling” and “psychotherapy” not easily translatable.

The CCST is part-funded by the HSE, and is one of the few mental health services in Ireland tailored towards what O’Reilly Carroll describes as “culturally appropriate” care.

The HSE itself operates a dedicated psychological service for asylum seekers and refugees at St Brendan’s Hospital in Dublin, but its catchment area is limited to Dublin, Wicklow and Kildare.

Staff are “highly trained in multicultural issues”, says a HSE spokesperson, and “deliver such training to other staff and to university courses”.

But aside from these specialised services, mental health experts say it has been “a struggle” to react to the specific needs of ethnic minorities, including asylum seekers, given the suddenness of inward migration in the early 2000s and an under-resourcing of mental health services.

“Most people would not have had training in the particular needs of asylum seekers or indeed in relation to the needs of different ethnic groups,” says Prof Patricia Casey, psychiatrist at Dublin’s Mater Hospital, “so there was a problem and there continues to be a problem. We’ve had to learn on the hoof.”

The psychiatrist says if she was unfamiliar with expressions of grief in the culture of a bereaved patient, for example, she would have to track down experts abroad. “So I’d have to ring up a colleague in the UK who might be an expert [in this area], and say, look can you give me some information about normal grief and pathological grief in, let’s say, some tribe in South Africa, if that was the kind of person I was dealing with.”

Reactions to psychosocial stressors such as family disputes among patients from some cultural groups may even initially present as clinical depression, Casey has observed, which raises the potential for misdiagnoses.

Expressions associated with religious beliefs are another conundrum.