Analysis: Another damning report, but will anything change? 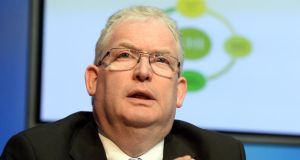 HSE director general Tony O’Brien promise to take “whatever action is appropriate” once he has had the chance to read the report in full. Photograph: Eric Luke/The Irish Times

Another health scandal, another report. What will be different this time?

The word “accountability” appears in Hiqa’s report on Portlaoise hospital 212 times, but will that make it any more likely that someone will be held responsible for what happened there?

For the failure, again and again, to learn from mistakes? For the failure to implement reports and recommendations previously made? For the inhumane, degrading treatment of up to eight women who had just lost their babies or were later seeking answers on what happened to them?

Let’s start with the HSE, whose deep unhappiness with the report has been known for some time. It says it will implement the recommendations, but it still has major objections to the content.

Individual midwives and doctors have been denied due process by not being allowed to respond to the allegations in the report, the HSE argues, and in any case, major changes have been made in the way the hospital is governed and staffed in the last year. “Nothing to see here, move along now,” sums up its response.

It doesn’t sound like staff will be facing any sanctions over the deaths of eight babies in their care; any failings were “sins of omission, rather than commission”, it was said at the HSE press conference yesterday.

The HSE was certainly on the receiving end of some strong stuff over at Hiqa’s press conference. That heard accounts of dead infants being delivered to women in tin boxes, of bereaved mothers being told not to cry, of the truth being covered up.

“I’ve never seen an organisation as badly organised as the HSE,” chipped in healthcare consultant Martin Turner, which is something given that he has advised governments in Iraq and Kazakhstan. The HSE was not a learning organisation and safety was not on its agenda, he said.

Back to the HSE press conference, where director general Tony O’Brien was gushing about the “swift, effective and decisive” action taken by his organisation in the past year: the appointment of extra staff, new governance arrangements, a link-up with the Coombe hospital in Dublin, training for the midwives in Portlaoise.

On closer examination, some of these claimed improvements unravel. Many of the posts have yet to be filled, and agreement has yet to be reached with the Coombe on the nitty-gritty of resources and an indemnity for obstetric claims from the past.

So, as the head of the HSE, does O’Brien accept any personal responsibility for what happened? “The bulk of the adverse events [ie, deaths] occurred before I was in this role,” replied O’Brien. He did promise to take “whatever action is appropriate” once he has had the chance to read the report in full.

And yet one of the couples who lost a baby in the hospital, Mark and Róisín Molloy, wrote to O’Brien in 2012 about their loss, and said other families with similar stories had been in touch with them.

O’Brien said yesterday he had referred the letter to his quality and patient safety division, which started an investigation. Three years on, it appears this investigation is still ongoing.

What of Minister for Health Leo Varadkar and his responsibilities? He has promised the independent patient advocacy service called for by Hiqa will be set up. This sounds suspiciously like the patient safety authority promised in the programme for government four years ago and quietly shelved in the last 18 months.

He also says the national maternity strategy will be ready by the end of the year, though the steering group was appointed just last week, perhaps fortuitously days before Hiqa reported. The health watchdog previously called for this two years ago in its report on the death of Savita Halappanavar, but not much has happened.

Varadkar, while active and engaged, has failed to prove he can also be effective. Given the scale of the criticisms made by Hiqa, perhaps the time has come for him to show his mettle by taking real action to ensure accountability.