A sweet treatment with some side effects 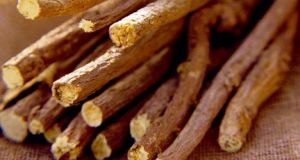 DOES IT WORK?:Liquorice as a treatment for ulcers

LIQUORICE IS more often associated with sweets than herbal remedies, but the plant extract has been used in both ways for many centuries. The plant is native to the Mediterranean region, but is now cultivated around the world. The roots and rhizomes (other underground parts) of the liquorice plant are used to make a very sweet extract.

The most commonly used commercial liquorice in the food industry is Spanish liquorice, although less expensive products sometimes use anise rather than true liquorice. Anise roots give a similarly flavoured sweet extract, but the two plants are completely different. Medicinal uses relate only to true liquorice.

The underground plant material contains between 5 and 9 per cent of a very sweet compound called glycyrrhizin (from the name of the liquorice plant, Glycrrhiza glabra). Glycyrrhizin is 50 times sweeter than sugar and has been added to many cough and cold medicines to mask bitter tastes. Most liquorice produced, however, is used by the tobacco industry to reduce the bitterness of tobacco smoke and add a sweet, woody flavour. Particular interest has developed in recent years around the use of liquorice and related compounds as a treatment for ulcers, especially those of the stomach and intestines.

Interest in liquorice for ulcers developed from anecdotal reports that it relieved stomach irritation. Laboratory studies showed that liquorice extracts and glycyrrhizin block the metabolic breakdown of prostaglandins and other natural steroids. This results in elevated levels of several naturally occurring hormones. This has been shown to be beneficial for those with stomach and intestinal ulcers, but can lead to numerous side effects.

In particular, liquorice inhibition of cortisol breakdown (a steroid which influences kidney function) leads to retention of water and salt by the kidneys and loss of potassium. This can then lead to higher blood pressure and muscle weakness (from loss of potassium).

In an attempt to separate the beneficial effects from the adverse ones, glycyrrhizin was chemically modified to make a drug called carbenoxolone. During the 1960s, this became one of the first drug treatments for stomach ulcers. However, the adverse effects were not removed and later synthetic drugs had fewer adverse effects and were more effective.

For some unknown reason, much variability exists in how people respond to carbenoxolone and liquorice products. Although clinical trials of these products were conducted in the 1970s, their quality was not the best and side effects were commonly reported with continuous use.

Small amounts of liquorice are not problematic. However, large quantities can cause liver and heart problems, along with high blood pressure. Potassium levels may drop significantly when liquorice is consumed, contributing to elevated blood pressure and muscle weakness.

Consuming large amounts of liquorice over extended periods of time, even in sweets, can cause problems. Anyone eating 30g of liquorice daily for several weeks is likely to develop adverse effects, but for people with underlying heart or kidney problems, or high salt intake, as little as 5g daily can be problematic. No more than 100mg glycyrrhizin should be taken daily.

Considerable variation exists in liquorice products and how people respond to them. Liquorice typically contains about 2-3mg glycyrrhizin per gram of extract, but this varies depending on harvesting conditions and how the roots are processed. Evaluations of commercial products have found anywhere from 0.03 to 98mg glycyrrhizin per gram of extract.

In addition, individuals vary widely in their tolerance for liquorice. Some people have disagreeable reactions after a week or two of high intake, while others can consume larger quantities without problems. All of this variation has led to more interest in conventional treatments for ulcers, for which effective and safe medicines exist. These also tend to have fewer side effects.

Liquorice continues to be added to multiherb products used for the relief of stomach problems. Given the low dose in such products, liquorice probably provides some relief without the complications of excessive consumption.