A Doctor Writes: malaria and its treatment 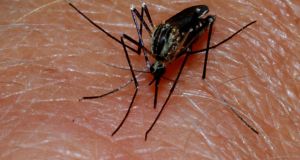 Humans get malaria from the bite of a malaria-infected mosquito. The insects feed on blood, and when a mosquito bites an infected person it then carries the malaria bug. If the mosquito bites again, the parasites are passed on.

The parasites, called plasmodium, then travel to the person’s liver, where they multiply, before entering red blood cells; it is at this stage the person begins to feel unwell.

This generally happens after two to three weeks, depending on the type of malaria but it can take up to nine months. The red blood cells burst and the parasites attack other red blood cells. At the same time, toxins from the parasite are released into the blood, making the person feel unwell.

Individualised treatment
There are a number of types of plasmodium parasite, each of which are prominent in different areas in the world. In addition, different areas are associated with resistance to some anti-malarial drugs. So treatment must be individualised to include factors such as local malaria species, patterns of anti-malarial drug resistance and the personal medical history of the patient.

One of the treatment options is the drug mefloquine, sold under the brand names Lariam, Mephaquin or Mefliam. It is not the drug of choice; in areas where there is no treatment resistance, oral chloroquine is usually recommended.

For plasmodium falciparum infections (or if the exact type cannot be identified), acquired in areas with chloroquine resistance, four treatment options are available.

The first two are atovaquone-proguanil and orartemether-lumefantrine. Both of these are quite effective. Quinine sulphate plus the antibiotics doxycycline, tetracycline, or clindamycin is the next treatment alternative. The fourth option, mefloquine, is associated with side-effects including potentially severe neuropsychiatric reactions.

Lariam use has recently been banned by the US army. Originally popular because of its once-weekly dosage regimen, it has always been associated with liver and heart problems. One of its most common side-effects is excessive sleepiness – a problem for anyone driving or operating machinery. But the biggest concerns have arisen around its association with paranoia, hallucinations, severe anxiety, depression and suicidal ideation. It now seems these side-effects can persist for months after treatment.

While Lariam continues to have a role to play in the treatment of malaria, the risk-to-benefit ratio must be carefully calculated for each patient.