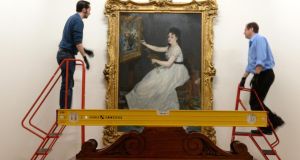 Simon Lawlor and Peter Billing hanging the Edouard Manet portrait of Eva Gonzales at the Hugh Lane Gallery as part of the Hugh Lane Collection, which returned from the National Gallery in London Photograph: Cyril Byrne/The Irish Times

Four priceless pieces of art have returned to Dublin’s Hugh Lane Gallery after six years on display in the National Gallery London. The paintings, Les Parapluies by Auguste Renoir; Portrait of Eva Gonzales by Edouard Manet; Jour d’Ete by Berthe Morisot and View of Louveciennes by Camille Pissarro, will go on public display from tomorrow.

The Hugh Lane Gallery has a deal with the National Gallery London, where eight French impressionist paintings are rotated in two lots of four every six years.

Director of the Hugh Lane Gallery Barbara Dawson said this is a very exciting time for the gallery.

“Not only are these big names, but they are incredibly significant. Any museum would be privileged to have them on exhibition. I couldn’t even begin to put a price on them,” she said.

“This is an exciting homecoming for these much loved masterpieces which are part of the cultural history of modern Ireland. These superb works will be on exhibition for the enjoyment of all Dubliners and visitors to the city.”

The arrangement between the Dublin and London galleries came after Mr Lane promised his 39-piece art collection to London in his will, but an unwitnessed alteration to the will before his death promised it to Dublin.

In 1959, an agreement was reached whereby half of Lane’s bequest could be displayed in Dublin every five years. This agreement was changed in 1993, so that the eight ‘superstar’ paintings would swap between London and Dublin every six years. A total of 31 paintings previously owned by Mr Lane remain in Ireland.

Irish youth to lead global study into impact of Covid-19 on young people 00:00
Concerns continue over raw sewage from treatment plants 00:00
‘If you apply for a driving test now, you might get one by June’ 23:57
Police investigating Maradona’s death seize files from doctor 23:03
Fans put Lennon under pressure as Celtic knocked out of league 22:52