Conditions in Kerry are worsening as Storm Desmond sweeps across the country. The storm is expected to continue into Sunday and motorists are being advised to drive with caution for the duration of the bad weather.

Galway photographer Cathal Devlin captures the moment when two young men jump into a raging sea from the Blackrock diving board at Salthill Galway during extremely dangerous conditions brought on by storm Desmond. Video: Cathal Devlin 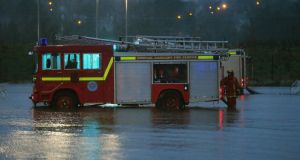 Members of the fire service bail out water from shops in the Ballybofey area of Donegal. Photograph: Niall Carson/PA 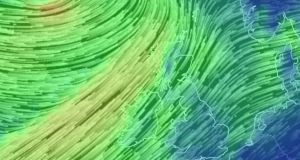 Storm Desmond approaches the West - as seen on the earth.nullschool.net windmap website 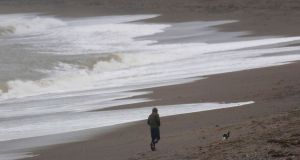 Met Éireann has warned of extremely wet and very windy throughout the day on Saturday with a status red rainfall warning remaining in place until 3am on Sunday. Above: A man takes a walk on Greystones beach. Photograph: Nick Bradshaw/The Irish Times 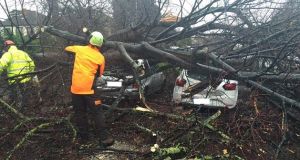 A number of cars were damaged by a falling tree in Nutgrove Avenue, Dublin. Photograph: @GardaTraffic

The strong winds and heavy rain brought by Storm Desmond are forecast to continue into the early hours of Sunday.

The storm has caused flooding,power outages, damage to buildings, and forced the cancellation of flights, sailings and sports fixtures.

Western areas have been hardest hit by the storm and a rare Met Éireann status red national weather warning remains in place.

Forecasters had predicted “incessant falls of heavy rain” for all of Saturday with accumulations in excess of 70mm expected in some areas, with greater totals on higher ground. The predictions appear to have been correct.

Extensive flooding has been reported across the western seaboard in particular, with towns flooded and many national roads impassable.

Crossmolina in Co Mayo is one of the worst hit areas and the N59 Belmullet to Ballina Road is completely impassable in the town due to the River Deel bursting its banks. Gardaí on Saturday night said severe flooding had hit the area and motorists should avoid it.

Members of the Civil Defence were deployed in parts of Kerry, where a number of areas have come under pressure as a result of the elements. Kenmare was inaccesible on Saturday evening and flood waters were continuing to rise in the town square while the park area was also flooded.

Clare County Council advised against all but essential travel as storm waters made the local road network treacherous. Motorists across the State were advised to be cautious.

In Co Antrim, storm damage was caused to properties in Larne and Point Street and Lower Cross Street were closed due to a building in the area being deemed unsafe.

In Co Galway, the Owenriff River burst its banks near Oughterard, causing serious flooding on the N59 main Galway to Clifden road. The Raford River also overflowed near the village of Kiltullagh causing large flooding of land and spot flooding on roads. Some divers were filmed jumping into the sea at Salthill despite the conditions.

Cork County Council has issued red alert flood warnings for both Bandon and Skibbereen with both the Bandon and Ilen Rivers heavily swollen due to heavy rain.

According to a Cork County Council spokesman, the Bandon Flood Early Warning System (FEWS) has been showing huge rises in water levels in the Bandon upstream of the town.

Council staff have been filling sandbags since 1pm and members of the civil defence have been distributing them to homeowners and business people in low-lying areas of the town.

Meanwhile, council staff in Skibbereen, which is also under threat, have also been filling sandbags and civil defence members have been distributing .

However while heavy rain has led to some flooding on Mill Road and Marsh Road, the centre of Skibbereen is so far unaffected. Residents and business people there remain on high alert.

Elsewhere there is flooding on roads around Inchigeela, Balllingeary, Ballyvourney and Crookstown in mid-Cork while there was also flooding on the main Bandon-Dunmanway road at Manch.

Gardaí say three empty cars were crushed after a tree fell on them in a car park in Rathfarnham.

In England, a man (90) died after being blown into the side of a moving bus near Finchley Central station in London. Up to 150mm of rain was expected in some areas, with Cumbria particularly badly hit.

ESB Networks said on Saturday evening that some 1,700 properties still remained without power despite services being restored to some 11,000 customers over the course of the day.

The largest single disruption was in Crossmolina where the entire town was been knocked off grid.

ESB Networks also reported a “large fault” in the Pelletstown and Scribblestown areas of Dublin but power was later restored to some 2,000 homes in the affected areas.

At one point some 95 separate line faults were reported nationwide, and Tuam, Letterkenny, Killybegs, Belmullet, Galway, Athlone and Mitchelstown were some of the worst affected areas.

The public has been warned not to touch damaged or fallen electricity cables and to contact the ESB on 1850372999 or 112 if they are discovered.

Dozens of flights and ferry sailings have been cancelled, diverted or delayed as a result of the strong winds caused by the storm.

Ryanair flights have been particularly badly affected, with dozens of cancellations from Dublin Airport on Saturday. Aer Lingus flights to Britain and Europe have also been affected, and many journeys into Dublin airport have been cancelled or diverted due to high winds.

Three flights from Cork to Birmingham and Manchester were also cancelled this morning.

Stena said the adverse conditions had led to the cancellation of the 2.30am and 2.30pm sailings on the Irish Sea. The 9am Stena sailing from Rosslare to Fishguard sailing has also been cancelled.

Passengers intending to travel today or early tomorrow morning are advised to check their carrier’s website for updates.

Rail services were running with a five to 10 minute delays as a result of the weather, Irish Rail said.

Gardaí and the Coast Guard have reported no major incidents so far.

The weather also took its toll on public events with Glow Christmas Festival in Cork and the Clonakilty Marathon cancelled, along with GAA inter-provincial championship matches and Leinster’s game with Glasgow warriors.

Met Éireann said the status red rainfall warning for Connacht, Donegal, Clare and Kerry would expire at 3am on Sunday. Status orange wind warnings for Wexford, Wicklow, Donegal, Galway, Leitrim, Mayo, Sligo, Clare, Cork, Kerry and Waterford were due to expire at the same time, the forecaster said.

“It’s pretty nasty. The heaviest of the rain, as expected, is in Connacht, Donegal and west Munster- the Atlantic seaboard counties plus the inland counties of Connacht, and the heaviest of all the rainfall has been in Galway, Mayo and Donegal in the northwest and west,” said meteorologist Pat Clarke.

“The good news is that all this rain, all this wind that we have will clear away overnight. Sunday will be a much clearer day, big improvement weather-wise, a lot of dry weather and some sunshine.”