Residents appeal against plans for 300 new homes in Pelletstown 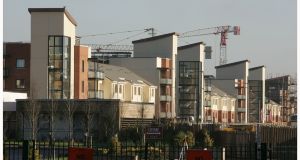 Construction under way at Pelletstown, between the River Tolka and the Royal Canal. Photograph: Alan Betson

A €65 million plan to build hundreds of homes along the Royal Canal in Dublin has been appealed to An Bord Pleanála by a group representing about 4,000 local residents.

Receivers for Capel Developments were granted planning permission from Dublin City Council for 318 homes – 176 apartments and 142 houses – in Pelletstown, an area between Ashtown and Cabra designated for new residential growth.

However existing residents, most of whom live in recently-constructed apartments, say the new homes should not be permitted because facilities promised for the new town, including schools and a railway station, have not been built.

Just 4km (2.5 miles) from the city centre, the area was zoned for residential development in 1999.

The following year, a plan was drafted for the development of a new town with the intention of reducing “unsustainable trends towards commuting and urban sprawl” and providing “housing at higher densities”.

The Government’s Construction 2020 strategy, published in May 2014, included an initiative called “kick-start” which allowed local authorities to relax residential density guidelines in certain areas seen as having the greatest potential to provide new homes.

The initiative applied to Adamstown in west Dublin, Cherrywood to the south east of the county, Baldoyle in Fingal, and Clongriffin and Pelletstown in Dublin city.

Following the introduction of the kick-start initiative the city council began, after a hiatus of several years, to receive planning applications for housing in Pelletstown.

Seán Mulryan’s Ballymore is building 314 homes, while Joe O’Reilly’s Castlethorn has permission for 208 homes. Pelletstown is one of the few areas in the city where new housing is on sale for under €300,000.

However, the Royal Canal Park Community Association, representing residents groups in the Pelletstown area, claims the services in the area cannot support any further housing development at this time.

Social Democrats to abstain on all votes for taoiseach as Dáil resumes 12:13
Explosive device found outside Martin Finucane’s home 11:51
Woman arrested over alleged threats to victim of rape 11:26
The 33rd Dáil convenes today: What can we expect? 11:25
Drug-taking caused death of student at Co Cork music festival, inquest hears 11:06