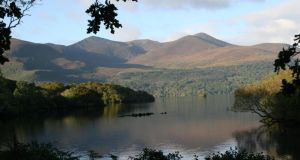 A proposal by the National Parks and Wildlife Service to allow full public access to the ancient oak woods and rarely glimpsed cascade at the western edge of the Killarney National Park is meeting with objections.

The remote area at Tomies West was recently home to one of the first pairs of nesting eagles in Ireland in more than 100 years.

The application is to build a 1km roadway, 28-space car park and new entrance on the western edge of the park and at the biggest of the Killarney lakes, Lough Leane.

As well as providing access to O’Sullivan’s Cascade, a visitor attraction much-loved by the Victorians and often reached by boat, the roadway will bring a greater number of visitors to the Tomies loop walkway.

Two local farmers have given permission for access across their land but the roadway and car park will be mainly within the park.


Objections
At present Tomies Wood can be entered only through farmland and dogs are not allowed.

The council has received a number of objections from environmental groups, as well as from members of a local farming family and walkers in the area.

Friends of the Irish Environment claimed the access will degrade the protected woods and core Unesco Biosphere Reserve – a wilderness area “composed of a mosaic of wildlife habitats”.

The group said allowing access will also undermine the responsibility of the park management to prevent exploitation. “People pressure should be kept to a minimum in the more remote areas of the national park,” it added, in a statement.


Sensitive
“It is intended to facilitate human access to the heart of one of Europe’s and Ireland’s most sensitive nature conservation sites – the O’Sullivan’s Cascade, Tomies Woodland and the Lough Leane Shore. ”

The group also claimed mitigation measures, such as fencing off the viewing points directly around the waterfall and removing a picnic table, brush piles and signage to discourage further intrusion in the woodland and bog, only highlight the extreme sensitivity of the area and are intrusive in themselves.

An Taisce, while welcoming better public provision, said the project has “shortcomings” and will lead to a huge jump in visitor numbers.

Members of the Cremin family, whose land adjoins the walkway, have said an alternative lakeshore route exists.