Over 30 protected birds of prey poisoned in Northern Ireland 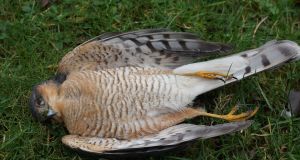 A dead sparrowhawk. Photograph: Partnership for Action Against Wildlife Crime 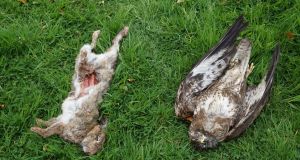 A dead rabbit and buzzard. Photograph: Partnership for Action Against Wildlife Crime 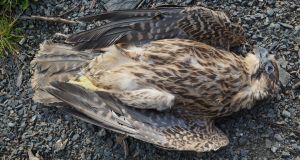 More than 30 protected birds of prey were killed in Northern Ireland in five years, according to a report on wildlife crime.

A golden eagle, white-tailed eagle and peregrine falcons were among the rare species poisoned between 2009 and 2013 although the most common casualties were buzzards and the recently-introduced red kite.

Environment Minister Mark Durkan condemned those behind the illegal attacks as reckless.

He said: “It is a great shame people here are poisoning these wonderful, majestic creatures which brighten up our skies and countryside.

“I very much condemn the reckless and illegal actions of the minority in our midst who destroy beauty with painful death, leading to the loss of such iconic species. I urge the public to be vigilant and report offenders.”

The report, published by the Partnership for Action against Wildlife Crime Northern Ireland (PAWNI), highlights 30 illegal poisoning or persecution incidents affecting some 33 birds including sparrowhawks and merlins.

There were also four probable raptor crimes, including another white-tailed eagle, while some birds fell victim to poisoned baits, it reported.

Superintendent Brian Kee, from the Police Service of Northern Ireland’s rural and wildlife crime unit, said a small number of individuals have shown a “continued disregard” for wildlife safety.

He said: “These actions which destroy our native wildlife are illegal and the indiscriminate use of such toxic poisons may affect not only raptors but also children, pets or livestock.”

It is hoped the report will help identify “hot-spot” areas, as well as increasing public awareness and education.

Author Dr Eimear Rooney, from the Northern Ireland Raptor Study Group (NIRSG), said: “I cannot bear to think about the deaths of these individuals, in particular the losses of both golden and white-tailed eagles and red kites, which may have a devastating impact on the survival of these populations.”